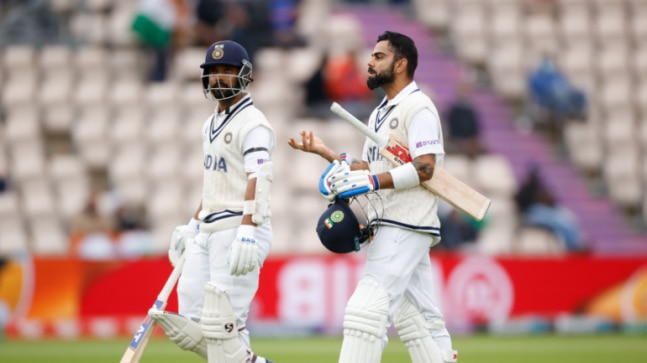 Star India batter Ajinkya Rahane has revealed that he was not able to take his mind off the much-talked-about run-out of Virat Kohli during the day-night Test in Adelaide in 2020 and how it affected his morale in the rest of the Test match, which proved to be one of India’s lowest moments in their cricket history.

Ajinkya Rahane said he went to the dressing room and immediately apologised to his then captain Virat Kohli after the run-out from Day 1 of the series opener at the Adelaide Oval.

India were looking to take control of the opening Test as captain Virat Kohli was leading them from the front with a solid half-century. Kohli and then vice-captain Rahane had stitched an 88-run stand for the 4th wicket and were looking to get more fluent when the unfortunate run-out happened.

Rahane pushed a Nathan Lyon delivery to mid-on and set off for a run before sending Kohli back. However, Kohli was not able to get back in time. the then skipper looked frustrated as he walked back to the dressing room.

India went from 188/3 to 244-all out after Kohli’s run-out on Day 1. Rahane fell for 42, missing a straight delivery from Mitchell Starc just 3.4 overs after the Kohli run-out.

“I don’t think I can ever forget that moment, or anyone can. When the ball hit my bat, I didn’t realise how well I had timed the ball. And I thought it was an easy single, it was an instinctive call, but when I took a couple of steps, then I realised the ball was next to Josh Hazlewood who was a mid-on. It was right under his hand,” Rahane said in the first episode of Voot Select’s series, Bandon mein tha dum.

“Then I had to say no. Even before Kohli got out, I knew that this could be a game-changing moment and that’s when I had that reaction. I immediately said sorry to him.

“I knew it could have been the turning point in the game, and that’s what happened.”

India took a first-innings lead of 53 runs but the visitors were bundled out for just 36, the lowest-ever total in the history of Test cricket, en route to a humbling 8-wicket loss.

Rahane said the run-out did affect his concentration but Kohli backed him and urged to move on when he went andd apologised to his then captain the dressing room.

“My mind was continuously thinking of that run-out.

“Generally, I play that ball to mid-on but because of what happened 2-3 overs, my mind was completely blank.

“When I went inside the dressing room, I went to him and ‘said sorry’. He said ‘it’s fine, these things happen, don’t worry. We have the second innings, we will stitch another partnership and take the team forward’.

“But somehow, I felt from the inside that it was the moment that could change the game. Had that run-out not happened, the game could have gone in a different direction,” he added.

Notably, India fought back from the Adelaide Test defeat to pull of a sensational 2-1 series win. Leading from the front, stand-in captain Rahane marshaled his troops well as India breached Australia’s fortress at the Gabba to script history.

Share
Facebook
Twitter
Pinterest
WhatsApp
Previous articleNBA Finals Game 6: Warriors star core one game from greatness as they face Celtics in possible series-clincher
Next articleIndia vs South Africa | I can’t bowl as fast as Umran Malik: Harshal Patel on staying one step ahead of batters