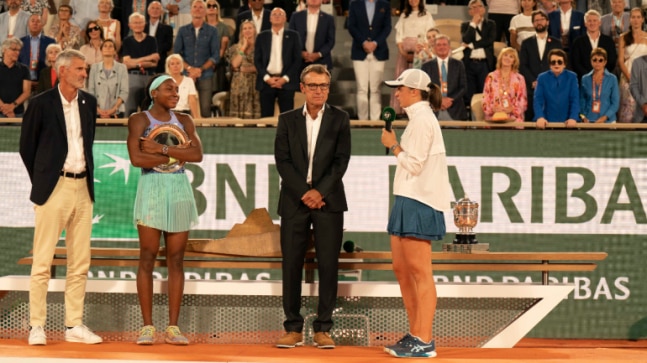 French Open champion Iga Swiatek and finalist Coco Gauff won billions of hearts after the women’s singles final. One such was American tennis legend Billie Jean King, who lauded the two young ladies for their advocacy for change.

While Swiatek voiced her support for ending the war in Ukraine, Gauff backed Black Lives Matter and urged gun law reform in the US.

“I always want every generation, both men and women, to step up, because sports is politics. Politics is sport. So anybody who doesn’t think so, I don’t agree with them… Everything is your audience when you go out to play,” the American legend was quoted as saying.

A true ambassador for our sport

King was honoured with the Legion of Honour, France’s highest civilian award, by French President Emmanuel Macron for her contributions to women’s sports, gender and LGBTQ equality.

“I also wanted to say something to Ukraine, to stay strong, because the war is still there. Since it started I (was) hoping when I do the next (tournament) the situation will be better but I will still have hope,” Swiatek said after the final.

Meanwhile, Gauff said, “Yes it’s a Grand Slam final but there are so many things going on right now especially in the US right now a lot of things are going on I think it’s not important to stress over a tennis match.

18-year-old @CocoGauff‘s message after advancing to the #RolandGarros final. pic.twitter.com/ohHlV2osAU

“Since I was younger my dad told me I could change the world with my racquet. He didn’t mean that by just playing tennis. He meant speaking out on issues like this. The first thing my dad said to me after I got off the court (was) I’m proud of you and I love what you wrote on the camera (Peace. End Gun Violence).”