T20 superstars Rashid Khan, Kieron Pollard and Dwayne Bravo are the latest to put in their nominations for the inaugural Big Bash League Player Draft. 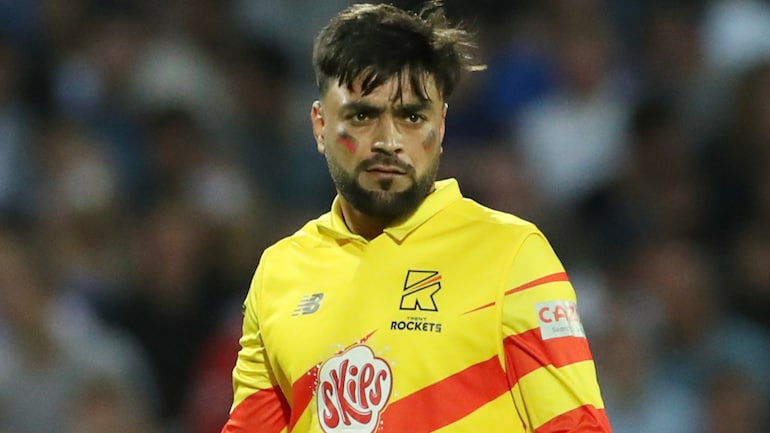 Rashid Khan could be retained by Adelaide Strikers (Courtesy: Reuters)

Afghanistan star Rashid Khan and West Indies all-rounder duo Dwayne Bravo and Kieron Pollard have nominated themselves for the inaugural Big Bash League Draft ahead of the 2022 season.

Khan, Pollard and Bravo, who have played a combined 1476 T20 matches, scored 20,065 runs and taken 1371 scalps, were announced as the latest marquee nominations for the Draft, alongside former South African skipper Faf du Plessis.

According to a report by cricket.com.au, the Afghanistan spinner is almost certain to be retained by Adelaide Strikers, with head coach Jason Gillespie indicating that the franchise will do everything in their power to retain the 23-year-old.

Pollard and Bravo made their last KFC BBL appearances in 2017-18 and 2018-19 respectively, and are free to be picked by any of the franchises.

Both men are coming off the back of strong performances in the Natwest T20 Blast where Pollard helped Surrey reach the quarterfinals and Bravo picked up nine wickets for the Worcestershire Rapids.

Apart from Khan, there are five more Afghanistan players who have put in their nominations for the upcoming Draft. Dashing opener Hazratullah Zazai and Qais Ahmed are two major names with the latter being eligible for retention by Melbourne Stars.

The inaugural Draft has already received more than 100 player nominations with New Zealand’s Colin Munro also being up for retention. The Kiwi batter played a crucial role last season as the Perth Scorchers won the title.

Trent Woodhill, the BBL’s Player Acquisition and Cricket Consultant, said that the nominations from Khan, Bravo and Pollard showed the attention the league has received since the conception of the Draft.

“To receive nominations from players such as Rashid Khan, Kieron Pollard and Dwayne Bravo demonstrates the attention on the BBL in the global marketplace thanks to the draft,” Woodhill said.