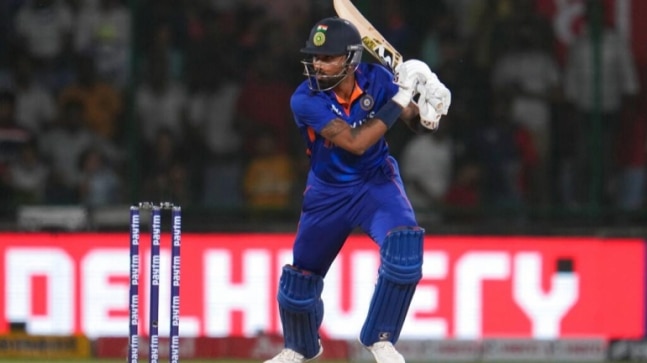 Former India fast bowler and Gujarat Titans head coach Ashish Nehra joked about Hardik Pandya’s decision to not give the strike back to Dinesh Karthik in the final over of India’s innings in the first T20I against South Africa on Thursday. Hardik denied a single in the penultimate delivery of the final over and asked Karthik to return to the non-striker’s end.

Hardik, who was India’s vice-captain in the first T20I of a 5-match series, hit 31 from just 12 deliveries in a stunning late overs assault, but all that he managed in the final delivery of the innings was a double after denying strike to Karthik in the previous delivery.

Karthik, who had made his comeback in Indian colours after a gap of 3 years, got to face only 2 deliveries as he walked into bat only in the final over of the innings after Rishabh Pant, the stand-in captain, got out in the first delivery of that over.

“He should have taken a single in that final over. Dinesh Karthik was at the other end, it wasn’t me.” Nehra joked during his interaction on Cricbuzz.

Furthermore, the Gujarat Titans head coach heaped praise on Hardik for easing back into the role of the finisher for India in T20 cricket. Notably, it was Hardik’s first match for India after the T20 World Cup as the all-rounder had taken a break to recover from long-standing back injury issues.

Hardik hit 3 sixes and 2 boundaries as he effortlessly fit into the role of the finisher after having batted at No. 4 for Gujarat Titans throughout their winning campaign in IPL 2022. Hardik had led Gujarat to glory in the IPL, shining at the No. 4 spot in his debut season as captain.

‘HARDIK CAN PLAY ANY ROLE’

Nehra said Hardik can excel at any position, regardless of the format of the game because of his ability and the work he has put in to improve his batting skills.

“Hardik Pandya is such an actor that can play any role. Be it, a hero, or a villain. If you want him to play the heroine, he can do that also, because he has the ability and the game to bat in any situation,” Nehra joked.

“Not just in T20I cricket but also in 50-over format and Test cricket. He has incredible ability in his batting. He can score runs in No. 4 and No. 3 as well. Hardik Pandya has played this finisher’s role for a long time. He can bat anywhere because of his ability and the work he has done,” he added.

India’s effort with the bat went in vain as South Africa chased down a 212=run target with 5 deliveries to spare, thereby ending the Asian giants’ 12-match-winning run in T20I cricket.