England vs India: England rode on Moeen Ali’s all-round heroics and Reece Topley’s fantastic bowling to hammer India by 100 runs and level the three-match ODI series 1-1 at Lord’s on Thursday. 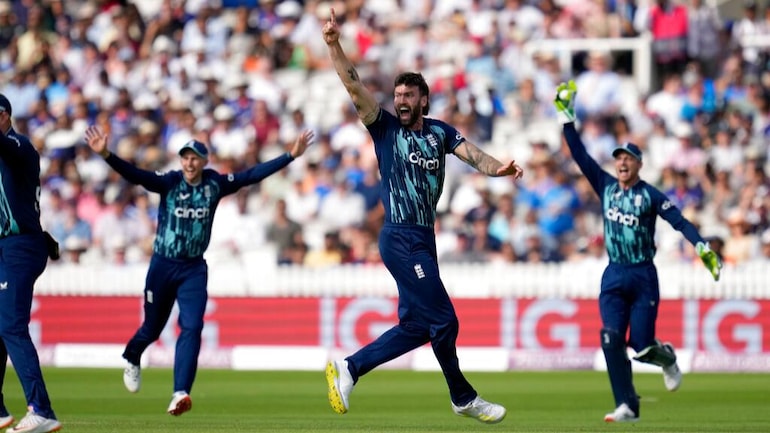 Less than two days after they were hammered by 10 wickets at the Oval, Jos Buttler-led England came up with a fine all-round effort to outclass an insipid India by 100 runs in the second ODI and level the series 1-1 at the Lord’s Stadium in London on Thursday. Chasing 247, India managed just 146 runs in 38.5 overs as their hopeless batting performance was on display.

India were off to a horror start in their pursuit of 247 as Reece Topley removed Rohit Sharma for a 10-ball duck in his second over. Rohit failed to make any contact on a swinging delivery as he was trapped out leg-before. Topley then ended Dhawan’s struggling 9-run knock as the India opener was caught down the leg side and the English pacer got his second wicket in a fine opening spell.

Rishabh Pant, who walked in at No.4, was the next India batter to depart as he chipped a low full toss from Brydon Carse straight to mid-on. Virat Kohli, who was making a comeback, hit three lovely boundaries off Topley before David Willey dismissed him for 16 as India slipped to 31 for 4.

Suryakumar Yadav then joined hands with Hardik Pandya and displayed glimpses of his Trent Bridge masterclass with some audacious shots before Topley returned to remove him for 27 and break the solid 42-run stand. Moeen Ali then scalped Hardik’s wicket and the visitors were left with Ravindra Jadeja plus the tail-enders.

Earlier, Yuzvendra Chahal’s clever variations helped India bowl out England for a manageable 246 in 49 overs in the second ODI at Lord’s on Thursday.

England reached a respectable total thanks to Moeen Ali (47) as the English batter took the attack back to the opposition camp with his audacious hooks and pulled sixes after the top-order failed to deliver. Moeen and David Willey (41 off 49 balls) stitched a 62-run stand for the seventh wicket to help set up a 247-run target in a must-win game for England.

Chahal (4/47) was brilliant in managing his lengths as he got rid of England’s ‘Big Three’ — Jonny Bairstow (31), Joe Root (11) and Ben Stokes (21) — and then dismissed Moeen just when he was looking dangerous.

At the other end, Pandya (2/28) chipped in with the crucial wickets of Jason Roy (23) and Liam Livingstone (33) to choke the run-flow as Rohit Sharma had another fine day in office. Mohammed Shami (48/1) was regal as usual as he knocked over England captain Jos Buttler (4) with a sharp inswinger that tailed in late. Jasprit Bumrah (2/49) and Shami were once again in the zone although it wasn’t as big a debacle for England compared to the opening game.