HomeSportENG vs IND | Jos Buttler out for a golden duck on...
Sport

England captain Jos Buttler departed for a golden duck in the first over of the game on his full-time captaincy debut after taking over from Eoin Morgan. 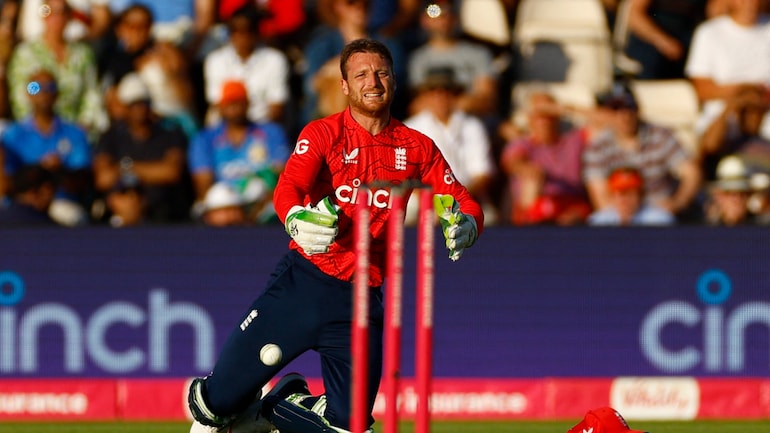 Jos Buttler during the first innigs of the first T20I vs India. (Courtesy: Reuters)

England captain Jos Buttler was castled by India’s lead pacer Bhuvneshwar Kumar in the very first over of the second innings. Chasing 199 runs in the first T20I game at Southampton, England would have hoped that the best white ball batter in the world would have gotten them off to a rapid start. However, that seemed to be far from truth as England lost their first wicket in the penultimate ball of the over, after Bhuvneshwar Kumat swung the ball into the right hander.

A peach of a delivery shaped into the batter cramped him for room and took out his stumps.

England were put into the backfoot in the first innings as well, when returning Rohit Sharma decided to take the charge and started hitting right at the top. Useful contributions in the middle order from Suryakumar Yadav and then a half century from Hardik Pandya put India in control. England did manage to pull back at the very end, but India had scored 198 by the end of their 20 overs.

England would have hoped to make merry in what looked like a belter of a pitch to bat on, but lost wickets at quick intervals. After losing Buttler in the first over, the hosts lost anchor Dawid Malan and blistering middle order batsman Liam Livingstone during a spirited Hardik Pandya over. The all-rounder’s terrific form continued as he showed his ability to keep the batsman guessing, hitting the right areas in the pitch.

At the time of writing, England were tottering at 32/3 at the end of six overs. Jason Roy was having a tough time in the crease, struggling to time the ball, while youngster Harry Brook had just walked into bat.