Hardik Pandya won the player of the series award for his all-round contributions with both bat and ball. This marks his third successful series in a row since returning in India colours. 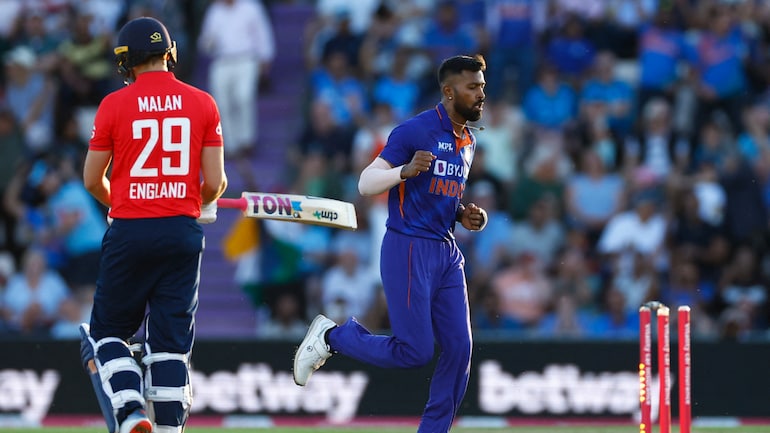 Hardik Pandya takes a wicket in the T20I series vs England. (Courtesy: Reuters)

Indian all-rounder Hardik Pandya was awarded the player of the series after his tremendous contributions with both bat and ball. Pandya rose to the occasion in the third ODI game, the decider in Manchester when India were put under the pump in the absence of Jasprit Bumrah.

The ace Indian pacer picked up a back spasm ahead of the game, which left India with depleted bowling options, however, the visitors did not lose intensity. Replacement Mohammed Siraj combined with Hardik Pandya to break the England batting line-up, with Pandya ending up with four wickets from his seven overs.

Pandya said that he had big shoes to fill with Bumrah out and knew that he had to step up.

“We knew Jasprit was not going to play this game. He was telling me that I might have to bowl a couple of overs at the death, I said they are ‘very big shoes to fill’,” Pandya was quoted by AFP.

“I had to step up, not at the death, but in making sure that in the middle overs I got the breakthroughs.”

Last time that India played at Manchester, they were defeated in the World Test Championship finals by New Zealand. When asked about the same, Pandya said that he does not bother about the past.

“The past is the past, the Manchester semi-final has passed,” he said.

“You can’t change anything and in cricket there is no revenge, it does not matter to be honest. For us it was important how we go forward from here.”

This series marks yet another high point for Hardik Pandya since his return from injury. Since April, Pandya has won the Indian Premier League as a captain, has performed well against South Africa and England and has even captained the Indian team in Ireland.