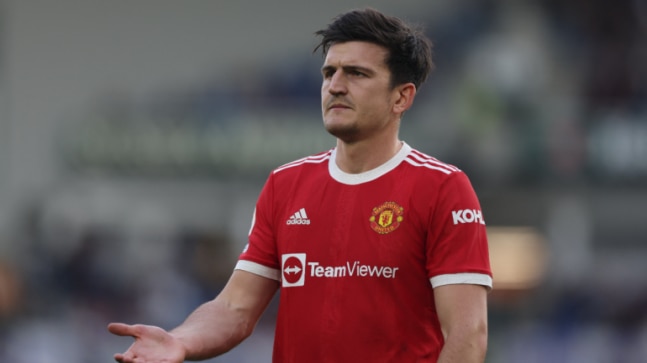 Harry Maguire breaks silence on bomb threat horror: There is a line, I do have a family (Reuters Photo)

Manchester United captain and England defender Harry Maguire has broken his silence and hit out at those who made a bomb threat to his home, saying the incident left his family scared and crossed a line. Maguire was forced to call the police following the threats in April.

Maguire made it clear that a bomb threat to his family home following a heavy defeat by Liverpool last season was simply unacceptable.

“There is a line. We are human beings. I do have a family,” Maguire, who was booed during a March friendly against Ivory Coast at Wembley Stadium, told reporters. “My mentality is that it doesn’t affect me too much, but when it comes to bomb threats, it is more about family.

“I’m just happy my kids are at an age where they don’t read things and see things on the news.”

Cheshire Police found no suspicious items during a search of the house.

Maguire expressed surprise at being jeered by England fans for his performances at club level last season but said he would not let that experience ruin his “amazing” relationship with them.

Maguire endured a torrid campaign for United and was often singled out for criticism as the Old Trafford side finished sixth in the league and went trophy-less for another season.

“I was a bit shocked. If that had happened earlier on in my career I would’ve struggled that night,” added the centre back.

“I know my family and friends might have been affected by it but I was more surprised really… (but) I have had amazing times with the fans and I’m not going to let the minority doing that in the Ivory Coast game affect my relationship with the England fans, no.”

Maguire will look to discover the form that made United pay 80 million pounds ($100 million) for his signature in 2019 when England face Hungary in Budapest on Saturday before traveling to Germany three days later. ENG vs IND | Jonny Bairstow on heated exchange with Virat...