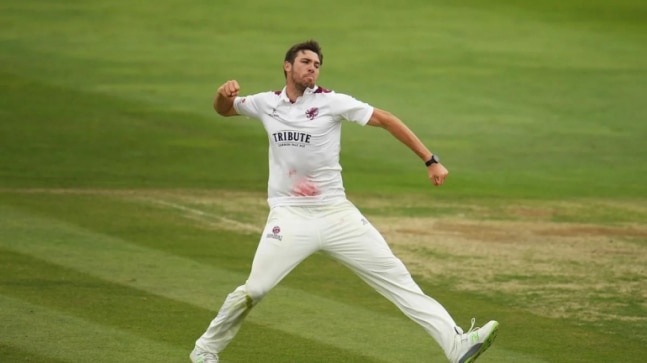 Jamie Overton,  who has been one of the stand-out performers for Surrey this season in the County Championship, has joined brother Craig in the England Test squad for the 3rd Test vs England.

England handed a maiden Test call-up for Surrey pacer Jamie Overton, who is the twin brother of Craig Overton, for the final Test of a 3-match series against New Zealand at home. Jamie was added to the squad in place of spinner Matthew Parkinson.

England are leading the 3-Test series 2-0 with the final match to get underway in Leeds from June 23. England’s decision to add Jamie to the squad puts the Overtons back in the same team after they went head to head in an English County Championship match last week — a meeting that ended with Craig suffering a concussion after Jamie hit him with a bouncer.

No twins have played for England at the highest level together and the inclusion of Jamie Overton might also not help change that as England hasn’t played Craig yet in the 3-match series. Jamie, 28, has been one of the stand-out performers for Surrey this season, picking up 21 wickets at an average of 21.61 in the County Championship.

However, the addition of an extra seamer suggests that England are looking to mix it up in the final Test after having played a 3-man pace attack along with captain Ben Stokes. One of James Anderson and Stuart Broad might be rested for the 3rd Test.

England will look to rotate their players ahead of the final Test as they will be up against India in the all-important one-off Test in Birmingham, which is a spill over from last year’s incomplete 5-Test series, from July 1.

Earlier on Thusday, New Zealand batsman Devon Conway became the latest player in the visiting camp to test positive for COVID-19 and will isolate for five days, joining all-rounder Michael Bracewell and two others in the coaching staff.