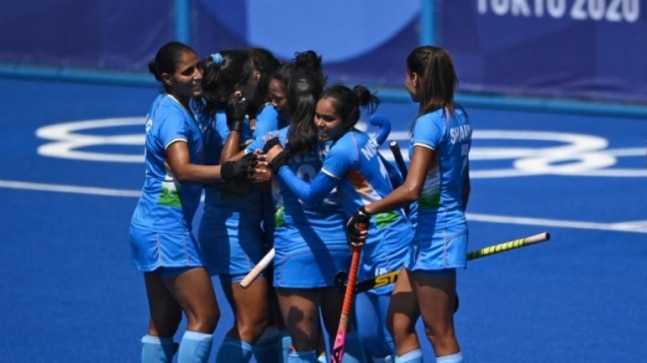 India women’s hockey team capped off their debut in the FIH Pro League with a dominating win over USA in their second leg match in Rotterdam on Wednesday, June 22.

The twin wins over USA helped India finish 3rd in the standings in their debut FIH Pro League season. Earlier on Tuesday, India had fought back from behind to beat USA 4-2 in the first leg match.

The star for India women was Vandana Katariya who scored a brace (39th and 54th minute) while Sonika (54th) and Sangita Kumari (55th) found the back of the net as India outclassed USA in an emphatic display that will give them confidence ahead of the Hockey Women’s World Cup next month.

Argentina took the title, finishing at the top spot with 42 points while the Netherlands finished at the 2nd spot with 35 points while India finished with 30 despite playing 2 games lesser than the leaders.

It’s raining goals in the Netherlands!

We finish our #FIHProLeague campaign with a victory.

India secured their first penalty corner in the 23rd minute but failed to execute the set piece.

The Indians kept on attacking thereafter and earned two more penalty corners but the end result was the same as both the teams failed to break the deadlock at halftime.

Three minutes into the third quarter, India secured a penalty corner but Navneet Kaur’s trap shot after initial fumble from the stopper was saved easily by USA goalkeeper Kelsey Bing.

But it was Janneke Schopman’s girls who broke the deadlock in the 39th minute when Vandana got a faint touch to deflect in Gurjit Kaur’s flick from India’s fifth penalty corner.

The Indians had numerous chances in the last two quarters. Navneet missed a sitter as her slap shot in front of an open goal went over the post. The Americans secured a penalty corner in the 43rd minute but India defended well.

India then scored three goals in a span of four minutes to seal the match.

First, Vandana scored an open goal from a build up from the right flank and then seconds later, Sonika found the USA net from a goalmouth melee from another attack from the right.

India skipper Savita Punia was as usual solid in front of the goalpost, making umpteen saves. The confident captain will be keen on making a mark when she leads India at the World Cup, which will be co-hosted by the Netherlands and Spain from July 1.

India will be without their influential star Rani Rampal due to an injury concern at the World Cup. (With PTI Inputs)