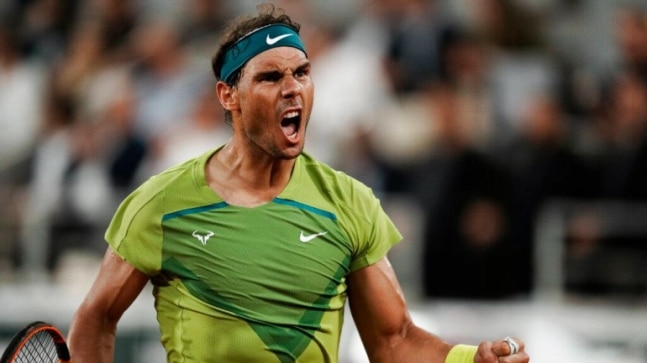 Rafael Nadal became the oldest man, going past Andres Gimeno’s record of 34 years and 305 days from 1972, to win the Roland Garros title. it is also the first time that Nadal is holding both the Australian Open and the French Open titles in a season. The Spaniard had won his 2nd Australian Open crown earlier this year, beating World No. 2 Daniil Medvedev in the final in Melbourne.

Nadal needed only 2 hours and 18 minutes to beat 8th seed Casper Ruud 6-3, 6-3, 6-0 in the men’s singles final on Sunday. Nadal registered his 21st bagel at Roland Garros and 3rd in the Paris final after decimating his academy student Ruud in the final set.

Nadal, who had headed into the final after a 3-hour battle with Alexander Zverev who retired in the 2nd set with a nasty ankle injury, looked nervy as he conceded a break in the first set even as Ruud, who trains at Rafael Nadal Academy in Mallorca, was dealing with nerves in his maiden Grand Slam final.

However, Nadal brought all his experience to take the first set 6-3 in the first set in 51 minutes. Nadal found another gear as the sun started shining in Paris as it aided his stroke play. The forehand winners were razing past the net as Nadal took the second set 6-3 from being down 1-3 at the start.

There was no stopping Nadal once he was 2 sets up as the Spaniard won 11 games on the trot to bagel Ruud in the final set and script history.

With the Roland Garros victory, Nadal took his tally to 22 Grand Slam titles, 2 clear of Roger Federer and Novak Djokovic who are tied on 20 Grand Slams each. Notably, Nadal outclassed Djokovic in 4 sets in the quarter-final last week en route to glory in Paris. It was revenge served for Djokovic, who had beaten Nadal in 4 sets in the Roland Garros semi-final last year.

Share
Facebook
Twitter
Pinterest
WhatsApp
Previous articleAmerican tennis legend lauds Iga Swiatek and Coco Gauff’s advocacy for change: Want every generation to step up
Next articleFrustrated Tamim Iqbal lashes out at BCB over T20I return: I am not being given a chance to speak