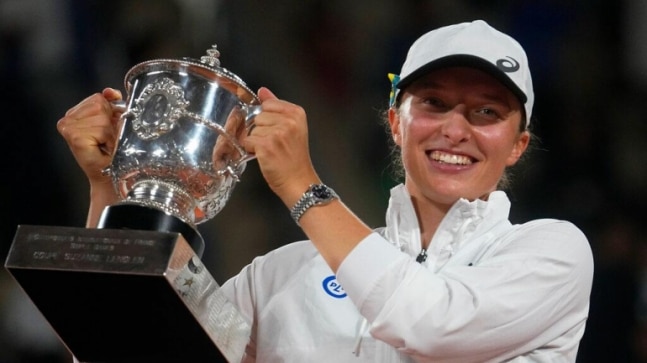 French Open 2022 champion Iga Swiatek was mesmerized when she saw Bayern Munich’s top goalscorer and her compatriot Robert Lewandowski was in the stands to watch her Roland Garros final.

Following her 6-1, 6-3 win over American teenager Coco Gauff in Saturday’s final, Swiatek had a handshake and a quick hug with her compatriot after going up to the stands to celebrate with her team.

“I didn’t know (Lewandowski was in the stands), and I’m happy about that, because I would get so stressed,” Swiatek told reporters.

“He’s been a top athlete in our country for so many years that it still feels hard to believe that he came to watch me. I hope he liked it. I hope he’s going to come back. Yeah, I don’t know. Just overwhelmed.”

Swiatek, who dropped just one set in the entire tournament, had earlier teared up when hearing the Polish national anthem following her win.

Swiatek did not drop a set during her 2020 triumph and lost just one during this year’s Roland Garros campaign, extending her winning run to 35 matches.

That took her past Serena Williams’ winning streak of 34 matches while she equaled Venus Williams with Saturday’s win over Gauff on Court Philippe Chatrier.

“It may seem pretty weird, but having that 35th win and kind of doing something more than Serena did, it’s something special,” Swiatek added.

“Because I always wanted … to have some kind of a record. In tennis it’s pretty hard after Serena’s career. So basically that really hit me.

“Obviously winning a Grand Slam too, but this one was pretty special because I felt like I’ve done something that nobody has ever done, and maybe it’s gonna be even more. Yeah, this one was special.”