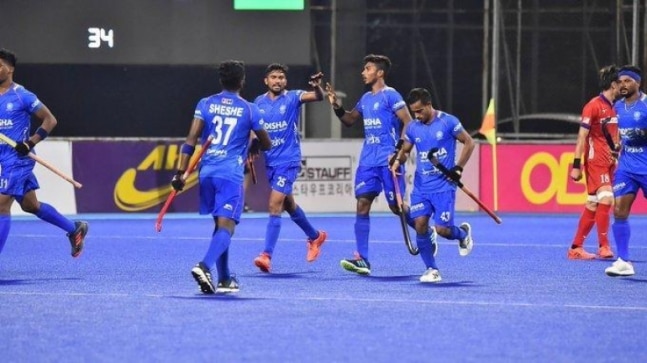 A second string Indian team beat 17th ranked Japan in the bronze medal match by 1-0. They scored a first quarter goal, which they managed to defend.

Rajkumar Pal’s sleek goal won India the bronze medal in the Hockey Asia Cup on Wednesday, 1 June at Jakarta’s GBK Sports Complex Hockey Stadium. The defending champions failed to enter the final of the tournament after a thrilling 4-4 draw with Korea. India did not get into the finals owing to a poor goal difference in the Super 4s pool table.

Fighting for a bronze medal on Wednesday, India scored in the first quarter itself to take the lead. Once the team was up by a goal early in the game, India held their defence strong to shrug off any potential attacks by the Japanese counterparts. This was in stark contrast to the last game that they played against Korea, which had eight goals in them. Japan were slow on the day and enjoyed long spells of possession but failed to penetrate through the defence.

This has been a topsy-turvy campaign for the Indian team who were forced to win by a minimum margin of 15-0 against Indonesia to force enough goal difference to enter the later stages of the tournament. India managed to win the game by 16-0 and then defeated Japan 2-1 in their very next game.

India did just enough to keep their opponents out after losing against them in the group stage of the tournament. However, things weren’t fruitful after that as they drew with Malaysia and Korea 3-3 and 4-4 respectively, knocking them out of the finals. India were the defending champions coming into the tournament, but had sent a second string squad.