I took time with my hamstring injury, I am not making a ton of decisions after Wimbledon: Serena Williams 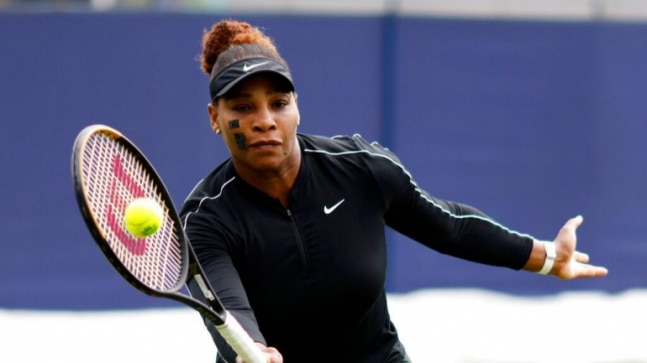 As part of her Wimbledon practice, Serena Williams teamed up with Ons Jabeur in women’s doubles at Eastbourne. The pair defeated Sara Sorribes Tormo and Marie Bouzkova in the first round 2-6, 6-3, 13-11.

American great Serena Williams made a winning return to professional tennis after a one-year layoff, but she said that her future remains uncertain in spite of her love for the game.

Williams surprisingly confirmed last week that she will be participating in the upcoming Wimbledon, where she has received a singles wildcard entry. However, she stressed that she will not make “a ton of decisions” after that.

“You know what, I’m literally taking it one day at a time,” Williams was quoted as saying. “I really took my time with my hamstring injury, so I’m just not making a ton of decisions after that.”

The 23-time Grand Slam champion had not played competitive tennis since retiring out from last year’s Wimbledon in the first-round match against Aliaksandra Sasnovich. She suffered a leg injury at the Championships, where she has won seven titles so far.

As part of her Wimbledon practice, Williams returned to competitive tournament. She, alongside Tunisian Ons Jabeur, defeated Spaniard-Czech pair of Sara Sorribes Tormo and Marie Bouzkova 2-6, 6-3, 13-11 in the first round of women’s doubles at Eastbourne International on Tuesday (June 21).

When asked if she saw herself playing next year, Williams said: “I don’t know, I can’t answer that.

“But I love tennis and I love playing, or else I wouldn’t be out here, right? But I also love what I do off the court, what I’ve built with Serena Ventures. It’s interesting.”

The 2022 Wimbledon will take place from June 27 to July 10. The draw for the Championships will be announced on Friday (June 24).