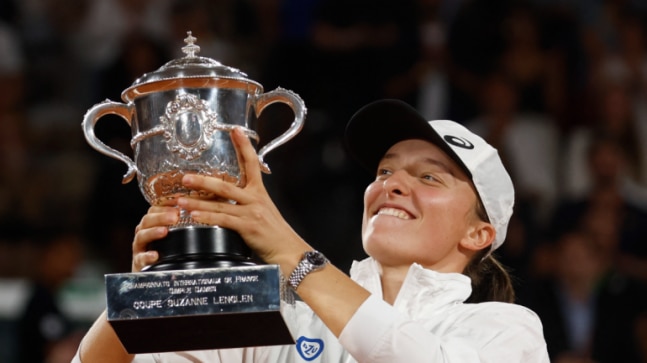 Iga Swiatek has won 6 tournaments on the trot in 2022. The Polish World No. 1 won her 2nd Roland Garros title on Saturday, defeating 18-year-old American Coco Gauff in a one-sided final.

World No. 1 Iga Swiatek capped off her stunning run on the women’s singles tour with her second French Open title on Saturday, June 4. The Polish superstar defeated American 18th seed, Coco Gaff, 6-1, 6-3 in a one-sided final that lasted only an hour and 8 minutes at the Philippe Chatrier in Paris.

The 21-year-old, who rose to prominence after becoming the first Pole to win a Grand Slam singles title when she lifted the Suzanne Lenglen trophy in 2020, has achieved quite a few awe-inspiring feats en route to glory at the Roland Garros.

Iga Swiatek on Saturday became the youngest player since Maria Sharapova in 2004 to become a multiple Grand Slam winner.

The Polish star also equalled Venus Williams’s feat for the most successive wins on the tour in the 2000s. Her win against Coco Gauff on Saturday was her 35th on the trot.

Swiatek’s French Open win on Saturday was also her 6th successive tournament victory in 2022. She has equaled the record of most consecutive tournament wins in 2000s – Venus Williams in 2000 and Justine Henin in 2007-08.

Iga Swiatek has won 9 tournaments on the trot, not dropping a single set in the finals of all those tourneys. She has not lost more than 5 games in those tournaments.

Iga Swiatek has now won 18 consecutive sets in finals, has not lost more than 5 games in her last 9 finals.

Swiatek is the undisputed numero uno in women’s singles tennis at the moment. After taking over the top spot from Ash Barty, who retired earlier this year, Swiatek has extended the lead over the chasing pack. In the updated rankings which will be released on Monday, Swiatek will have 8631 points, almost twice as much as second-ranked Anett Kontaveit (4325) on the WTA charts.

Notably, Swiatek had won her first WTA 1000 title at the 2021 Italian Open in Rome and broke into the top 10 for the first time, finishing the year as world number four. She was also the only player to reach the second week at all four Grand Slams in 2021.