IND vs SA: Hardik Pandya and Rishabh Pant will be explosive at No.5 and No. 6, says Sunil Gavaskar 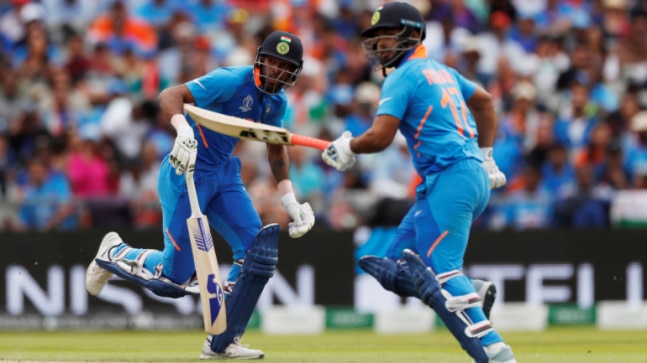 Sunil Gavaskar said that if Hardik Pandya and Risbabh Pant can bat at No.5 and 6 for India, the team will have the ability to score almost 120 runs in just 6 overs.

Hardik Pandya and Rishabh Pant will be explosive at No.5 and No. 6: Sunil Gavaskar (Reuters Photo)

Batting great Sunil Gavaskar believes all-rounder Hardik Pandya and wicketkeeper Rishabh Pant would be an explosive combination if the duo bat in the lower order in the upcoming five-match T20I series against South Africa. Gavaskar pointed out that the Indian team can score almost 120 runs in the final six overs if Hardik and Pant get to bat at No.5 and 6.

After the completion of IPL 2022 on May 29, the focus now shifts to India’s five-match T20I series against South Africa at home starting June 9. The series will mark the return of Hardik to the national side, who scored 487 runs at 44.27 for Gujarat Titans and played a vital role in their title win in their debut season. On the other hand, Pant, who was leading Delhi Capitals, is India’s first-choice wicketkeeper for the series and scored 340 runs at a healthy strike rate of 151.79 in the IPL 2022.

“I think he’ll probably be slotted at five or six. Just imagine, if India has a Hardik Pandya and a Rishabh Pant at five or six. They can probably swap around a little bit — that is going to be some explosive combination from the 14th to the 20th over. In six overs, you can probably expect even maybe 100-120 runs. They are capable of doing that. So, that’s going to be an exciting aspect. That’s something I’m really looking forward to — Rishabh Pant and Hardik Pandya batting at five or six,” Gavaskar said on Star Sports.

The Indian cricket team will assemble in New Delhi on June 5 ahead of the five-match T20 series against South Africa. There will be no crowd restrictions and there will be no bio-bubble for the series, though players will be tested regularly for COVID-19. The other venues are Cuttack (June 12), Visakhapatnam (June 14), Rajkot (June 17), and Bengaluru (June 19).

Share
Facebook
Twitter
Pinterest
WhatsApp
Previous articleEngland football star Harry Maguire breaks silence on bomb threat horror: There is a line, I do have a family
Next articleGetting my high school diploma meant a lot to me: Coco Gauff ranks graduation above French Open QF victory