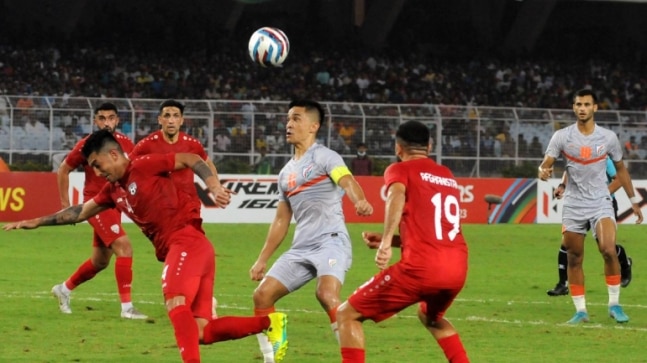 Sunil Chhetri’s men have qualified for the AFC Asian Cup Finals for the second successive time. India booked their berth even before the final qualifying match on Tuesday against Hong Kong.

India were at the 2nd spot in Group D, tied on 6 points with table-toppers Hong Kong. They have qualified for the finals despite being in the 2nd spot as 5 of the 6 best second-placed teams in the third-round qualifying were assured of berths for next year’s continental event.

India’s qualification was confirmed after Palestine defeated the Philippines in a Group B match earlier on Tuesday.

As Palestine defeat Philippines in Group , the #BlueTigers have now secured back-to-back qualifications for the @afcasiancup #ACQ2023 #BackTheBlue #IndianFootball pic.twitter.com/3aNjymWLSm

India defeated Cambodia 2-0 in their first qualifying match in Kolkata last week before beating Afghanistan 2-1 in a thriller. Captain Sunil Chhetri has been in fine form as he has netted 3 of the 4 goals India have scored so far. Chhetri broke the deadlock in the 84th minute against Afghanistan with a stunning free-kick.

Notably, Sunil Chhetri had stressed that qualifying for the Asian Cup Finals should be the bare minimum for India if they are to consistently compete with the best in Asia and improve steadily.

“We already spoke about it, the bare minimum target for us to qualify for the Asia Cup so that we can go and rub our shoulders with the best in Asia. I think I’m not trying to be too harsh on ourselves, but we need to be playing Asia Cup every edition so that we can assess how much we’re improving and also get an opportunity to play the best of Asian teams.” Chettri told Star Sports after starring in India’s win over Afghanistan.

China was scheduled to host the AFC Asian Cup in 2023 across 10 cities from June 16 to July 16 but the country gave up the hosting rights due to the Covid-19 pandemic. The AFC said it will announce the new hosts in the coming months.

With fans turning up in large numbers at the Salt Lake Stadium in Kolkata, India will be determined to finish their qualifying campaign with a win over Hong Kong and the top spot in Group D.

Share
Facebook
Twitter
Pinterest
WhatsApp
Previous articleAndy Murray’s Wimbledon appearance in doubt after he pulls out of the Queen’s Club Championship
Next articleNBA Finals: Golden State Warriors one game away from title after Game 5 win over Boston Celtics