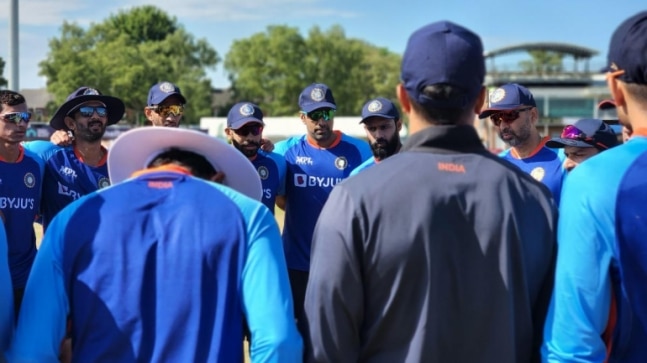 India tour of England: Star off-spinner R Ashwin joined the Indian team in Leicester before the start of the practice match against Leicestershire.

India received a massive boost before the Test match against England as a fit-again R Ashwin joined the Rohit Sharma-led side in Leicester before the start of the practice match. Ashwin had to miss his flight to the UK after testing positive for Covid-19.

Ashwin traveled to England after completing all the necessary protocols. BCCI took to Twitter to share pics from the practice session before the start of the warm-up match between India and Leicestershire.

Hello and welcome to Day 1 of our practice match against @leicsccc #TeamIndia pic.twitter.com/nUilsYz5fT

Notably, a majority of the Test specialists left for England from Mumbai on June 16, while skipper Rohit Sharma joined his teammates in England a day later. Rishabh Pant and Shreyas Iyer, who were part of the South Africa T20I series at home, left for England on Monday, June 19, after the 5th and final T20I in Bengaluru was washed out due to rain on Sunday. The rescheduled fifth Test of the series is set to begin on July 1 in Birmingham.

India captain Rohit Sharma won the toss against Leicestershire and opted to bat first in the four-day warm-up match. Cheteshwar Pujara, Rishabh Pant, Jasprit Bumrah and Prasidh Krishna will turn out for Leicestershire. But the focus will be on Virat Kohli, Rishabh Pant and Rohit’s return to form.