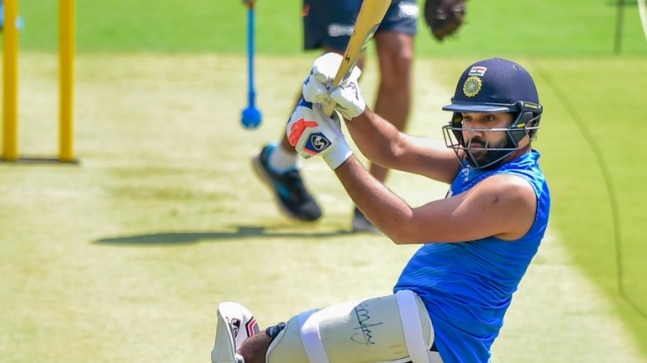 India tour of England: Captain Rohit Sharma led India’s batting practice session in Leicestershire along with fellow opener Shubman Gill. India will face the county side from June 24 to 27 in a 4-day practice match.

India players got down to business as they began training for the rescheduled fifth Test in England, starting July 1 after shifting their training base to Leicestershire from London. While the Test regulars were seen doing outdoor training in London, Rohit Sharma led the team’s first batting practice session at the Leicestershire County Ground on Monday, June 20.

Captain Rohit Sharma along with fellow opener Shubman Gill were seen hitting the ball at their first net session in the lead-up to the much-anticipated Test match. The players will use Leicestershire as their training base for the next one week during which they will also play a 4-day practice match against the county side from June 24 to 27.

Skipper Rohit and Gill focussed on front-foot defence in the short clip shared by the BCCI on social media. Rohit looked to pull a short delivery as the preparation for the first Test hit full stream.

Notably, Gill might open with Rohit in the one-off Test, which is a spillover from last year’s incomplete 5-Test series, in Birmingham as KL Rahul is all set to miss the series due to an injury that also kept him out of the recently-concluded 5-match series against South Africa at home.

It’s a pleasure to have you at Uptonsteel County Ground this week.

Gill has not played Test matches since last year’s series against New Zealand and it will be an opportunity for him to show his class after having impressed in Australia during the iconic Border-Gavaskar Trophy.

It will be a stiff test for Rohit Sharma, who will lead India in Test cricket for the first time outside India, as England are heading into the one-off Test after having taken a 2-0 lead in a 3-match series against world champions New Zealand. Under new captain Ben Stokes and head coach Brendon McCullum, England are playing an aggressive brand of cricket.