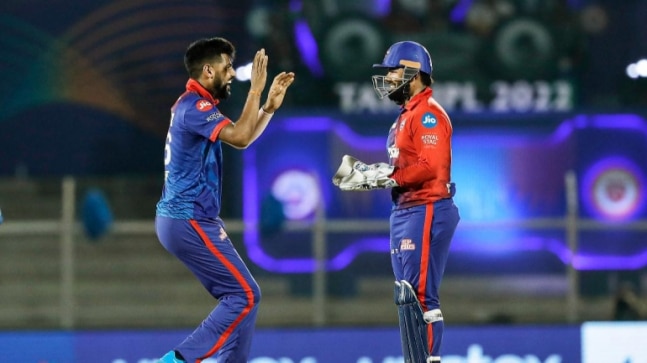 Rishabh Pant faced the heat for his captaincy against Delhi Capitals in their final league game against Mumbai Indians. In a must-win match, wicketkeeper and captain Pant made a tactical blunder as he did not use Decision Review System against Mumbai Indians’ big-hitter Tim David in a tense chase.

Ultra Edge replays suggested that David had edged the delivery from Shardul Thakur early in his innings but the review was not taken despite persuasion from Pant’s teammates. David went on to play.a match-winning knock of 34 off 11 balls.

Delhi Capitals had their fate in their own hands as a win against Mumbai Indians would have taken them to the playoffs but Pant’s blunder was seen as one of the main reasons for their early exit. DC have let go off clutch situations on more than one occasion this season and Pant’s captaincy has been questioned.

“Don’t compare Pant with MS Dhoni. Dhoni has so much experience, has captained in 500-plus games in IPL, Tests and ODIs. So it’s not fair for Rishabh to be compared with Dhoni,” Ganguly said, as quoted by the PTI.

Meanwhile, Ganguly also backed Rohit Sharma, saying there is nothing to worry about the India captain’s form or leadership ability after Mumbai Indians finished with the wooden spoon.

The record five-time IPL winning Mumbai Indians skipper had a woeful season finishing with 268 runs from 14 innings at an average of 19.14 with a modest strike-rake 120.17 as their team finished at the bottom of the standings this season.

Backing the duo, Ganguly said: “They are very good players. I’m sure they will be back among runs. They play so much of cricket that at times they go out of form. Kohli played very well in the last game, especially when it was required for RCB.

“That’s why he (Kohli) was so happy that RCB qualified. They are all great players, it’s a matter of time they will be at their best,” Ganguly added.