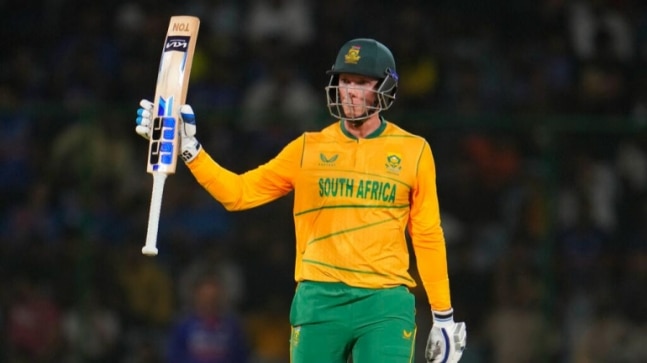 Rassie van der Dussen counts his experience of watching close games from the dug-out in IPL as invaluable, something that helped while chasing a huge Indian total in the first T20 International.

Van der Dussen, who although played only three games for the Rajasthan Royals this season, feels staying in India for the past couple of months, helped the majority of the South African players to cope with extreme conditions, while also providing them with a fair idea as to how to tackle the Indian bowlers.

“Definitely (IPL has helped). I watched a lot of IPL games, did not got much of an opportunity to play but I had a pretty good idea what their bowlers would do and the conditions,” van der Dussen said at the post-match press conference.

“Indian conditions are different to what we have in South Africa. I spent two month here, been in these conditions, been in the heat, so had acclimatised to that and that goes for everyone,” he added.

The likes of Quinton de Kock, David Miller, Kagiso Rabada and Anrich Nortje were all part of the league this season which was played entirely in India.

“We had a lot of guys in the IPL this year and that’s helped us in the first game to adapt quickly and get over the line.”

Van der Dussen further said that Harshal Patel’s slower delivery is a very tough ball to hit, but in the end, India’s pacer is also human.

“(He’s) got such a good slower ball. I think the end he bowled from played into my hands because of the short boundary. So I knew after getting those first two sixes away he had to go to his slower ball. And then it’s a matter of picking it and keeping your head still while trying to execute. It’s a very tough ball to hit. He gets a lot of energy in it, gets a lot of dip on it, but again he’s only human. You know that at some stage he is going to miss. As a batter you’ve just got to stay strong and stay patient over those balls that he bowls so well.”