It was worth the wait: 23-year-old Casper Ruud excited to meet Rafael Nadal in the final of French Open 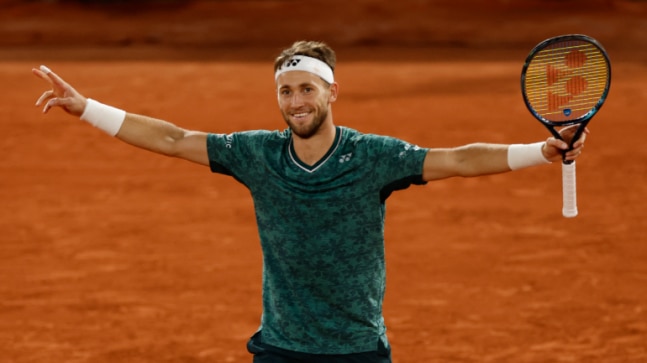 Casper Ruud made it to the final of the French Open, his first ever in a Grand Slam after beating Croatian Marin Cilic in the semi-final. He will now face Rafael Nadal on Sunday.

Casper Ruud is in his first ever Grand Slam final. He will face Rafael Nadal on Sunday, June 5. (Courtesy: Reuters)

The Norwegian who trains at Rafael Nadal’s academy is set to meet his idol in his first Grand Slam final. The youngster, who is possibly the best competitor to Rafael Nadal on clay at the moment, said that it would be a pretty special moment for him once he gets onto the court for the first time to face his idol Rafael Nadal.

Speaking after his four-set win against Cilic, Ruud said that it would be special to play one of the big three and hopefully he will make it a little exciting for the legendary Spaniard, who would be hunting for his 22nd Grand Slam.

“It’s amazing when you say it like this (Final against Nadal). He is the last player of the big three. They are very very top players in the world that I have never played against, so I guess this is perfect timing. It was worth the wait to finally play him in the Grand Slam final will be a special moment for me and hopefully a little bit for him as well.

He has played so many finals (chuckles), but at least he is playing a student from his academy this time. It’s going to be a fun one hopefully,” Ruud said after the match.

Alongside Ruud, Nadal made it to the final of the French Open despite counting himself out due to injury in the early stages of the tournament. Nadal set up an epic clash against Alexander Zverev, which was cut short by a horror injury to the German’s right ankle. The two played for three hours and 13 minutes and could not complete two sets between them. They both kept breaking each other’s serves before the injury happened in the tie-breaker of the second set. Zverev twisted his right ankle while trying to hit a forehand and screamed in pain as he took the tumble.

He had to be helped off the court and on his return, his right ankle looked terribly swollen.
Nadal expressed his concerns and hoped that the player was doing fine. There have not been any updates on Zverev’s condition at the moment.