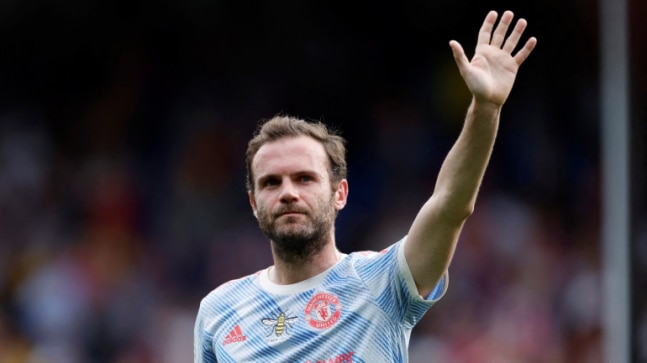 Manchester United have started moving quickly in the era of Erik ten Hag, announcing their third player departure within 24 hours.

Manchester United have confirmed the departure of veteran Juan Mata who served the Red Devils for eight years. A trophy-laden stay at Manchester United, Mata was one of the best midfielders the club had in the last decade.
A veteran of 285 matches for the club, Mata joined United at the height of his prowess from Chelsea after winning the Champions League in the 2011/12 season. By the time of joining United in 2014, Mata had already won the FIFA World Cup, the Champions League and the Euro Cup.

While his stay at United was not as fruitful as his previous club, largely due to the instability at United in terms of managerial appointments and his playing style, Mata impressed with his skill on the ball and his vision on the pitch.
Mata, now 34, plays sparingly in the United team, but has been loved by the fans for his treatment and engagement with the fans and youngsters who walk into the squad.

At his peak, Mata was famed for his first touch, his jaw dropping ability to free up players with skillful passes and for his calm demeanour in the pitch.

Mata was United’s third departure announcement in the last 24 hours. The club has already announced that Paul Pogba and Jesse Lingard have left the club. Mata’s exit is however, much less dramatic than the other two, who do not leave the Red Devils in good terms.

New full-time manager Erik ten Hag has said that United will need sweeping changes and bold steps need to be taken to make the club compete with the best of the world. The team will be playing in the Europa League next season, which should be in favour of the coach as well. United have had one of their worst seasons in the recent history of the club and finished sixth in the Premier League, just about making it to Europa league next season.