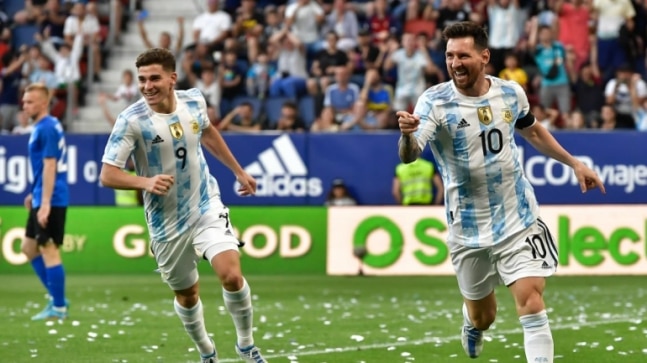 Lionel Messi scored five goals for Argentina for the first time in his international career to defeat Estonia in an international friendly in Spain.

Lionel Messi moved up in the charts of top international scorers in the history of football, scoring five goals against 110th ranked Estonia in an international friendly at Spain on Sunday, 5 June. He netted twice in the first half which involved converting a penatly and then scored thrice in the second half of the game.

This is the first time that Messi has scored five goals in a single match for his country, as the 34-year-old showed signs of getting back to his best right ahead of the 2022 Qatar World Cup that begins in November.

An incredible feat by any stretch of imagination, Messi has scored five goals in a match before, while playing against Bayer Leverkusen in the 2011/12 Champions League Round of 16.

Messi took to Instagram after the game and said that they could not have closed the season any better and thanked the crowd that came to watch the friendly in Pamplona.

“We could not close the season better. We won the Finalissima and today we added more minutes preparing for the World Cup. Thanks again to everyone who came to the field and to those who follow us from a distance. We’re going to rest for a few days and we’ll be back very soon! Hugs to all,” Messi wrote on Instagram.

The legendary Argentine had a tough time at his new club, Paris Saint-Germain, after the abrupt and heartbreaking end to his career at FC Barcelona. He failed to produce the goods in the Champions League and had a forgetful season overall. However, Messi recently in an interview reasoned the poor season and stated that he was not in the mental space to perform, but is looking forward to next season, vowing that he will come back stronger.

In recent days, Messi seems to have found form, scoring goals and assists in the final two match days for PSG and then taking that form into the international team. He scored two assists in the Finalissima against Italy to earn his second international trophy and now has scored five goals.

Going into the World Cup, Argentina are unbeaten in their last 33 games and are enjoying a purple patch of form.