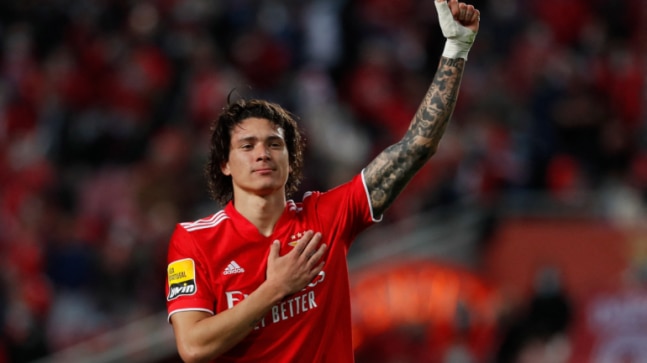 Darwin Nunez finished as the top scorer in Portugal’s top flight in the 2021-22 season, scoring 34 goals in all competitions for Benfica.

Darwin Nunez during a match for Benfica. (Courtesy: Reuters)

Uruguay forward Darwin Nunez is set to join Liverpool from Benfica for an initial fee of 75 million euros (USD 78.59 million), the Portuguese club announced on Monday.

In a statement, Benfica said that the agreement, which includes 20 million euros in add-ons, is dependent on Nunez signing an employment contract with Liverpool.

The 22-year-old Nunez finished as the top scorer in Portugal’s top flight in the 2021-22 season, scoring 34 goals in all competitions for Benfica, including goals in both legs of the club’s Champions League quarter-final defeat by Liverpool.

Nunez, who would make an ideal replacement for Sadio Mane, had joined Benfica from Almeria in 2020 for 24 million euros. According to the British media, the Spanish club is set to receive 20 percent of any profit from his transfer.

Liverpool won the FA Cup and League Cup but missed out on the Premier League and Champions League glory in the 2021-22 season.

Share
Facebook
Twitter
Pinterest
WhatsApp
Previous articleIND vs SA | Didn’t require someone to straightaway start hitting: Shreyas Iyer on Axar Patel coming in ahead of Dinesh Karthik
Next articleIt requires courage when you are treated unfairly: Mithali opens up how she overcame the feud with coach Ramesh Powar