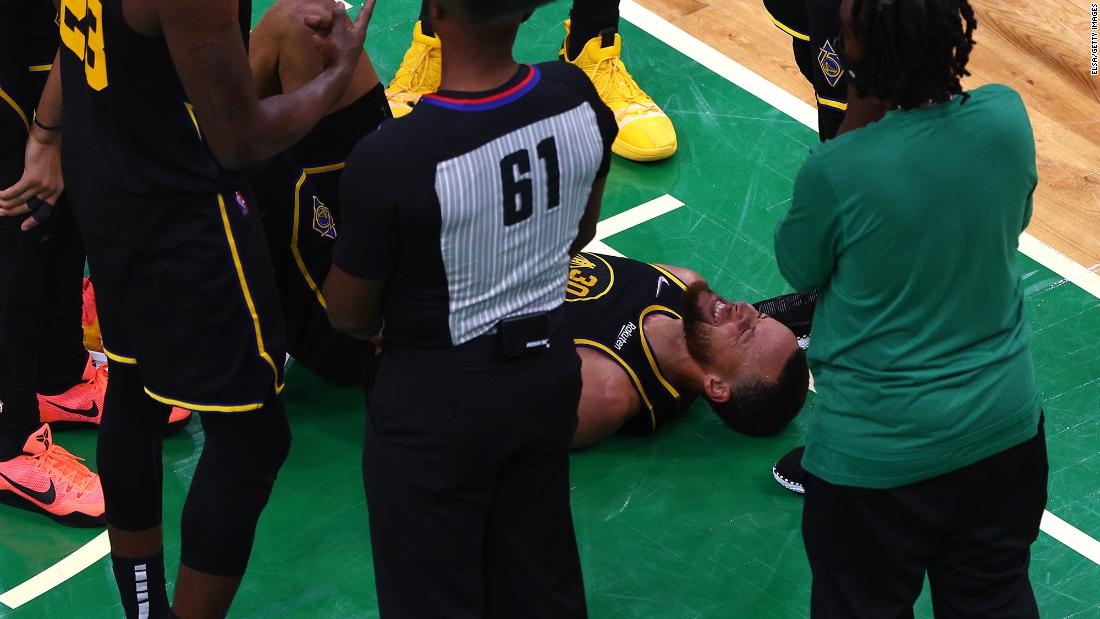 It was also the last time that the Warriors led as they were overpowered 116-100 by the Celtics who took a 2-1 lead in the NBA Finals best-of-seven series.

A bad night became worse for Golden State when Curry dove to the floor in a tussle for a loose ball with Boston’s Al Horford who rolled onto Curry’s foot with four minutes left in the game.

Despite writhing in pain on the floor, the Warriors talisman continued to play before leaving the court two minutes later.

“We need him if we want to win this thing,” Curry’s fellow Splash Brother Klay Thompson said. “I know Steph is going to do everything he can in his power to play. I am really hoping he’s OK because he’s our identity, and without him, it will be very difficult.”

Curry proved himself to be the only Warriors’ player capable of challenging the Celtics’ powerful defense which displayed its superiority late on, holding Golden State to 11 points in the fourth quarter.

He was the top scorer on Wednesday with 31 points and Golden State will be desperately hoping that he recovers in time for Game 4.

“Obviously, in some pain, but I’ll be alright,” Curry told reporters after the game. “See how I feel tomorrow and get ready for Friday.

“I don’t feel like I’ll miss a game. I’ll take advantage of these next 48 hours to get ready.”

Boston raced to an early lead helped by two three-pointers by Jaylen Brown — who led the Celtics with 27 points, nine rebounds and five assists — in the first quarter. Boston’s advantage widened to as much as 15 points and the Celtics took a 33-22 lead into the second quarter.

The Warriors shot just 8-of-23 in the first while their scrambling defense conceded multiple fouls including three called on Curry in the first half.

But, as was so often the case this season, Golden State regrouped in the third quarter and embarked on 14-3 run, enough to erase the Celtics’ lead.

In Game 2, a third-quarter scoring flurry was enough to secure victory for the Dubs, but this time the Celtics found a way to fight back.

“I felt like our team really stayed poised in those moments,” Horford told reporters after the game. “As you know, earlier in the year, that could have gone south quickly.

“But we stayed right with it and just locked in and didn’t panic and just continued to play.”

Boston pushed back with an 11-6 run, retook the lead heading into the fourth and never trailed again.

Jayson Tatum, Marcus Smart and Brown all contributed more than 20 points, five rebounds and five assists and became the first trio of teammates to accomplish this in an NBA Finals game since the Los Angeles Lakers’ trio of Magic Johnson, Kareem Abdul-Jabbar and Michael Cooper in 1984 — a series which coincidentally ended with a seven-game Celtics win.

Will this NBA Finals be an echo of that 1984 result? Game 4, which is scheduled for Friday, will provide answers.