NBA Finals: Golden State Warriors one game away from title after Game 5 win over Boston Celtics 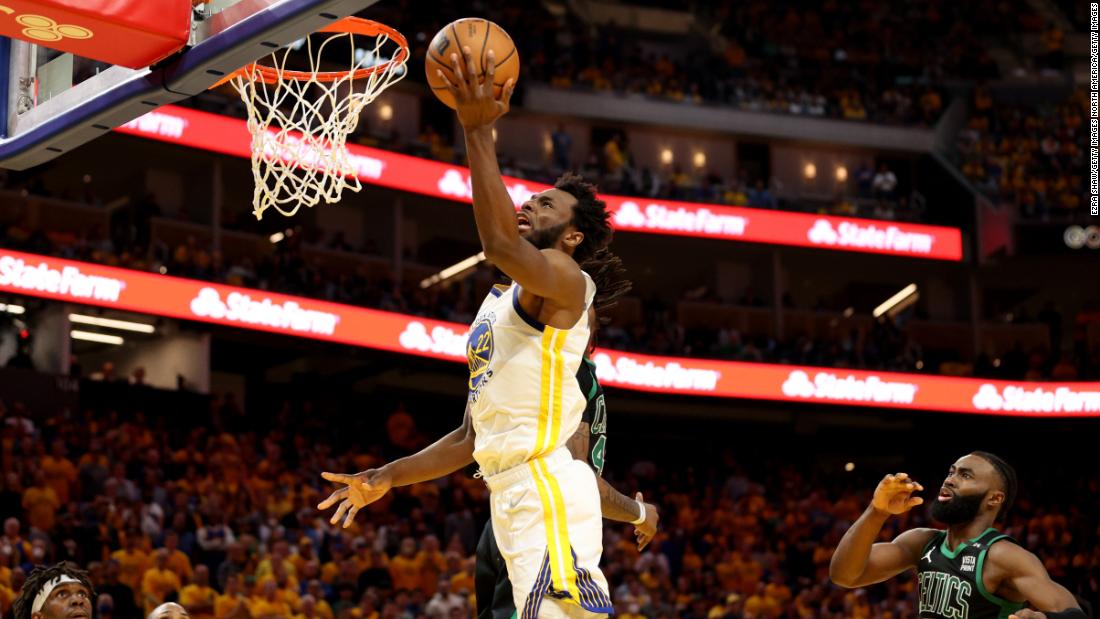 After a masterful 43-point performance in Game 4, Steph Curry endured a gruesome shooting night on Monday, going 0-for-9 from three-point range.

With Curry well below his superlative best, Andrew Wiggins stepped up and carried the team to victory with a 26-point, 13-rebound performance, while also adding two assists, two steals and a block.

“We’re here and we’re hungry. The team that wants it the most is going to get it, and we want it.”

According to ESPN stats, it was just the ninth time that Curry had failed to hit a three pointer in a game since 2013. The 34-year-old’s cold shooting night also ended his personal best run of 233 consecutive games with a made three.

Curry finished the game with 16 points, three rebounds and eight assists, but insisted his mindset going into Game 6 will be to “keep shooting.”

“Very simple … I’m not afraid to go 0-for-whatever because I’m going to keep shooting and taking shots that you normally feel like you can make, and I’ve responded well when I’ve had games like that from the three-point line,” he told reporters.

“I don’t think I’ve ever been happier after a 0-for-whatever type of night, just knowing the context of the game, the other ways you tried to impact the game and the fact that you had four guys step up in meaningful ways to help us win offensively.”

Klay Thompson contributed 21 points to the win, but it was yet another shocking night for Draymond Green, who fouled out for the third time in five games in these Finals.

Green has been heavily criticized throughout this series by fans and pundits, with some suggesting he seems more concerned with trying to rile up opponents than he does with his performances on the court.

For the Celtics, Jayson Tatum led the scoring with 27 points, while also pitching in with 10 rebounds and four assists, but has now broken the record for most turnovers by a player in a single postseason.

Lack of care when in possession has cost the Celtics dearly in this series and, after leading 2-1 in these Finals, they now need to win back-to-back games if they want to lift the franchise’s first Larry O’Brien trophy since 2008.

“Credit to them,” Jaylen Brown said, per ESPN. “They’re a really good defensive team. Disciplined and sound. They’ve forced us to do what obviously we don’t do best.

“We just got to continue to recognize the game, see the game and make in-game adjustments. Take care of the ball when it comes down to it. Another game with too many turnovers. It cost us.”

The two teams head back to Boston’s TD Garden for a possible series-ending Game 6 on Thursday night.