West Indies captain Nicholas Pooran termed the 3-run defeat vs India as bittersweet, saying that his team was moving in the right direction and they need to believe in each other. 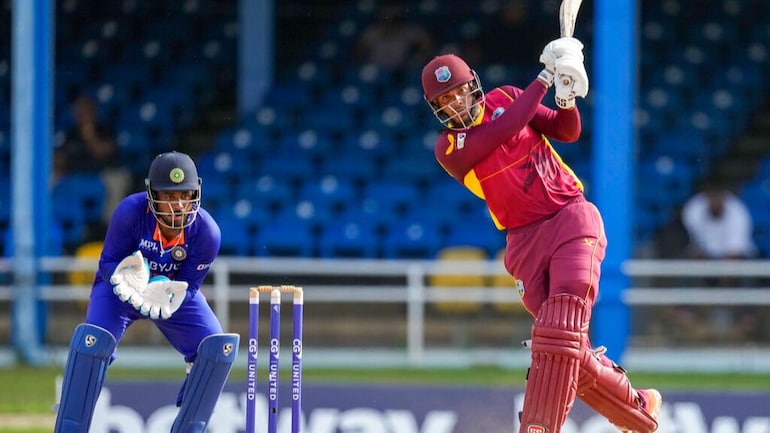 West Indies moving in right direction, need to believe in each other: Pooran after 1st ODI (AP Photo)

West Indies captain Nicholas Pooran urged his teammates to take positives from the first ODI after the hosts lost a last-ball thriller despite a valiant effort with the bat against India in Trinidad on Friday.

Shikhar Dhawan made a well-crafted 97 while Shubmam Gill made a classy 64 in his ODI comeback before India held their nerves to pull off a three-run win over the West Indies in the series opener. Openers Dhawan (97 off 99 balls) and Gill (64 off 53) shared a 119-run stand before the West Indies fought back to restrict India to 308 for seven.

The West Indies needed 15 off the final over for a record chase at Queens Park Oval but Mohammed Siraj was able to stop a rampaging Romario Shepherd (38 not out off 25). At the top of the order, Kyle Mayers (75 off 68) and Shamarh Brooks (46 off 61) raised West Indies’ hopes with a 117-run stand for the second wicket before Brandon King (54 off 66) took the game deep. In the end, the West Indies fell short and ended at 305 for six.

“Feels like a win for us. Bittersweet, but yeah we keep talking about batting 50 overs and everyone saw what we are capable of and hopefully we can go strength to strength from here,” Pooran said in the post-match presentation ceremony.

“Looking forward to the rest of the series. It was a good batting track and our bowlers did a commendable job to restrict them. It’s difficult to lose but we will take this one. We need to believe in each other and I keep telling everyone that we will have our challenges, but important to focus on the positives,” Pooran added.

The series opener was closer than expected. India came from a series win in England, while West Indies was swept aside by visiting Bangladesh. Both sides started well and finished slow.

Share
Facebook
Twitter
Pinterest
WhatsApp
Previous articleWorld Athletics Championships: Annu Rani finishes 7th in women’s javelin final
Next articleI have been non-stop since school, so enjoyed my break: Sam Curran on getting sidelined due to back injury