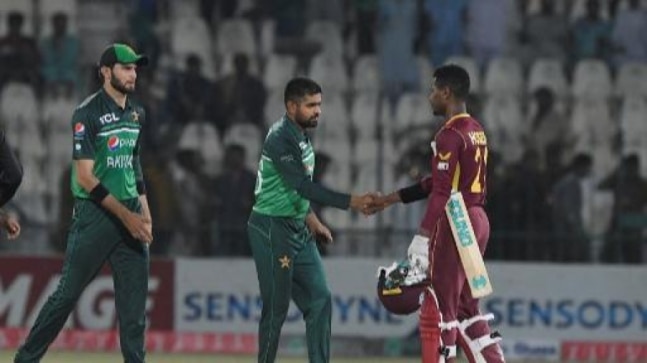 Pakistan vs West Indies, 2nd ODI: Pakistan captain Babar Azam cost his team 5 runs on Friday in Multan as his effort to collect the ball behind the stumps with wicketkeeper’s gloves was deemed ‘illegal fielding’.

Pakistan captain Babar Azam has hardly put a foot wrong in the ongoing ODI series against the West Indies in Multan. However, on Friday, Babar cost his team 5 runs after a bizarre turn of events during West Indies’ chase of 276 in the 2nd of the 3-match ODI series.

Babar Azam was caught using one of Mohammad Rizwan’s wicketkeeping gloves to collect a ball and the bizarre incident was deemed “illegal fielding” by on-field umpires. 5 penalty runs were awarded to West Indies during their chase on Friday at the Multan Cricket Stadium.

In the 29th over of the West Indies chase in the 2nd ODI, Babar was seen collecting a ball behind the stumps, wearing a wicketkeeper gloves.

According to Laws of Cricket, “28.1 Protective Equipment” No fielder other than the wicket-keeper shall be permitted to wear gloves or external leg guards. In addition, protection for the hand or fingers may be worn only with the consent of the umpires.

28.1 – No fielder other than the wicket-keeper shall be permitted to wear gloves or external leg guards. #PakvWI pic.twitter.com/WPWf1QeZcP

The goof-up from Babar did not cost Pakistan much as the hosts sealed a 120-run win, bowling out West Indies for just 155 in the 34th over to seal a 2-0 unbeatable lead in the 3-match series. Pakistan rode on left-arm spinner Mohammad Nawaz’s career-best figures of 4/19 to decimate the West Indies batting unit.

Notably, Babar had led from the front once again with the bat, scoring 77 runs as he stitched his 4th successive 100-plus partnership with Imam-ul-Haq to help Pakistan post 275 on the board in 50 overs on a hot evening in Multan.

Babar followed up his record-breaking 100 in the first ODI wherein he inspired Pakistan’s chase of 306, with a half-century in the 2nd ODI.