PAK vs WI: Babar Azam after his match-winning 103 in first ODI – Aim is to continue working on my strength 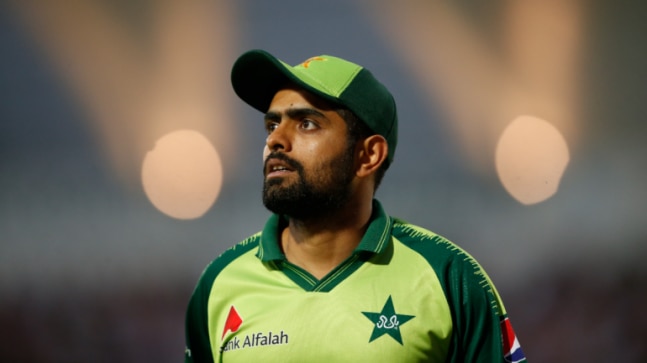 Pakistan skipper Babar Azam said that he needs to work on certain aspects of his game to get better and score more runs for his team across formats. The 27-year-old, on Wednesday, June 8, scored 103 runs off 107 balls against the West Indies, guiding his team to a five-wicket win over the West Indies at the Multan Cricket Stadium.

En route to his century, the Lahore-born cricketer also surpassed Virat Kohli as the fastest to 1000 runs as an ODI skipper. Even as Kohli achieved the feat in his 17th innings, Babar went to the milestone in only his 13th innings at an average in excess of 90.

“My aim is to continue working on my strength and my game,” Babar was quoted as saying.

After Pakistan lost the early wicket of Fakhar Zaman while chasing 306, Babar and Imam-ul-Haq restored sanity with a 103-run partnership for the second wicket. Babar said that the pitch in Multan wasn’t easy for batting and they had to plan their moves carefully.

“There was a bit of misunderstanding in the calling but later on the partnership went well and that was our motive, to take the game as deep as possible as the surface was not easy. The West Indies bowlers bowled really well,” he stated.

On playing in the hot and humid conditions, Babar said, “Any series we take on, we come with full preparation and we were we prepared for the heat. That is not an excuse. We have played in even tougher conditions. We need to give the bowlers credit. Especially Shadab, he bowled and fielded brilliantly.”

On Pakistan being able to chase well on a consistent basis over the past few months, the Pakistan captain mentioned, “Cricket has changed and we have to play proactively and with planning and intent. The plans were made, and we executed them well. The way Khushdil finished, it was great. The partnerships are important and that is what we wanted to do, to help the finishers end the game.”

The second and penultimate ODI of the three-match series is set to take place on Friday, June 10 in Multan.