PAK vs WI: Babar Azam sets another unique and unbelievable record after heroics in first ODI 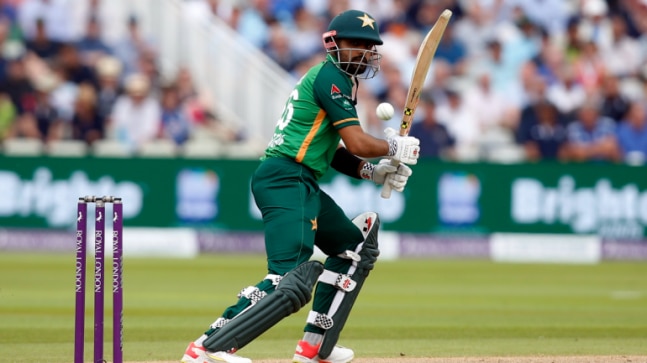 On Wednesday, June 8, Babar Azam scored 103 runs off 107 balls in Pakistan’s opening ODI against the West Indies at the Multan Cricket Stadium.

Babar Azam is currently in the form of his life, especially in ODI cricket. On Wednesday, June 8, the 27-year-old scored 103 runs off 107 balls with nine fours and took Pakistan to a five-wicket victory over the West Indies at the Multan Cricket Stadium.

After scoring a century, the Lahore-born batter set a unique record. Babar became the first batter in the history of ODI cricket to make three centuries in a row twice in his career. Earlier this year, Babar got scores of 114 and 105* against Aaron Finch’s Australia at the Gaddafi Stadium in Lahore.

The Young Turk managed to carry his form against the Caribbean team as well. He got out to Alzarri Joseph in the 42nd over of Pakistan’s run-chase, but by then, Pakistan were already in a position of command while chasing the target of 306.

The first time Babar scored three ODI centuries in succession was way back in 2016 against the West Indies. He got scores of 120, 123 and 117 in Sharjah and Abu Dhabi. It was Babar’s second year in international cricket, after which he hasn’t looked back.

Babar also surpassed former Indian skipper Virat Kohli to become the fastest batter to 1000 runs as skipper in ODIs. Babar achieved the feat in only his 13th innings at an average in excess of 91.

He was adjudged the Player of the Match in the opening ODI, but he gave it away to left-handed batter Khushdil Shah, who scored an unbeaten 23-ball 41 with the help of one four and four sixes.