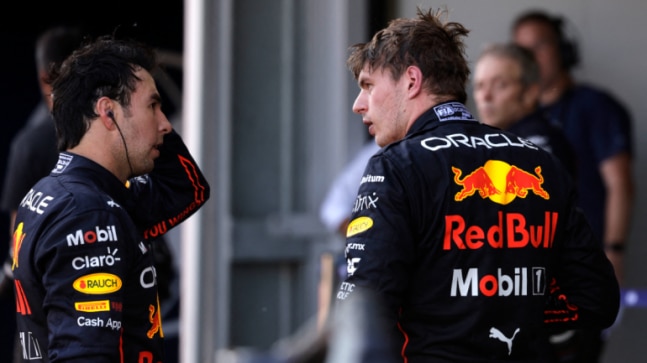 Sergio Perez has said that Red Bull’s position is of paramount importance as he trails teammate Max Verstappen by just 21 points.

Red Bull’s Sergio Perez has said that the team are being sensible when it comes to the contest between himself and teammate Max Verstappen.

Both drivers are currently leading the pack, with Verstappen sitting on top of the charts with 150 points. Perez (129) sits in second position ahead of Ferrari’s Charles Leclerc.

With Red Bull leading the charge this season, the spotlight has shifted on to the rivalry between the teammates and the team strategies.

The Mexican driver was unhappy during this year’s Spanish GP as he was asked to let Verstappen through early on and wasn’t returned the favour. During the closing moments of the race, Perez, who was leading the race, was told to not hold his teammate up.

Perez, while talking to Sky Sports, said that he knows he is doing well at the moment. However, he stressed that the team’s position is the most important thing and Red Bull has handled their contest sensibly.

“I just want to do the maximum for myself. I’m in this Championship and I want to win it but, I’m also aware that we have to look after the team.”

“Up to now, the team has been very sensible with everything they have done,” said Perez.

The Mexican driver continued by saying that while they did disagree during the Spanish GP, things were sorted out quickly. He also said that everything is going in the right direction for him and his aim is to play his part and try to win the Championship.

“In Barcelona, we disagreed. We spoke after the race, and we agreed it straight away. You could see that change was already made for Monaco.”

“That’s why I’m super happy, I recently renewed for the team. Things are going in the right direction and my role to play is to try and go for the Championship,” said Perez.