Steve Smith and Marnus Labuschagne slammed hundreds as Australia took firm control on the opening day of the second Test against Sri Lanka. 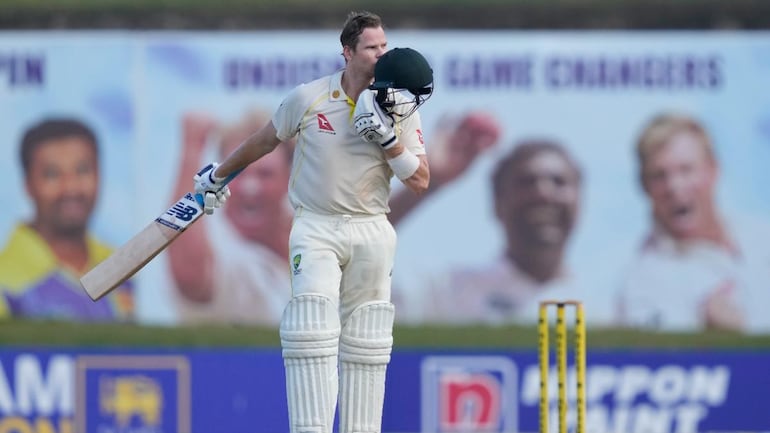 Steve Smith and Marnus Labuschagne slammed hundreds as Australia took control of the game on Day 1 of the second Test.

The visitors didn’t get off to a great start as they lost David Warner early as Kasun Rajitha cleaned him for just five runs. Usman Khawaja and Labuschagne put on a fifty-run partnership to steady things for Australia before the opener was dismissed for 37 by Ramesh Mendis.

Sri Lanka could have claimed a third wicket before lunch but Niroshan Dickwella missed a chance to stump Labuschagne when he had just scored 28 runs. The 28-year-old made the hosts pay for the error and scored his seventh Test hundred from 147 deliveries.

Smith and Australia’s No.3 added 134 runs in 37 overs as the visitors dominated the second session, leaving Sri Lanka searching for answers.

Labuschagne’s innings finally came to an end at 104 as he was stumped by Dickwella off the bowling of debutant Prabath Jayasuriya. The 28-year-old’s innings consisted of 12 boundaries.

After losing his partner, Smith took charge and battled on to reach his 28th hundred in the longest format of the game. This was the former Australian captain’s first century in 16 innings and just his second after the brilliant 2019 Ashes series he had in England.

Smith is still at the crease unbeaten on 109 from 212 balls. His innings consisted of 14 boundaries. Alex Carey was his partner at stumps.

Jayasuriya was the pick of the Sri Lankan bowlers as the debutant showed a lot of character in his first game. He helped the hosts to mount a late comeback as he picked the wickets of Travis Head and Cameron Green along with his crucial breakthrough to dismiss Labuschagne.

The left-arm spinner ended the day with figures of 90 for three wickets in 28 overs.

Share
Facebook
Twitter
Pinterest
WhatsApp
Previous articleDaniel Oss: Cyclist withdraws from Tour de France after breaking neck in high-speed crash with fan
Next articleLewis Hamilton feels he is close to winning again: I truly believe we can get a race win this year