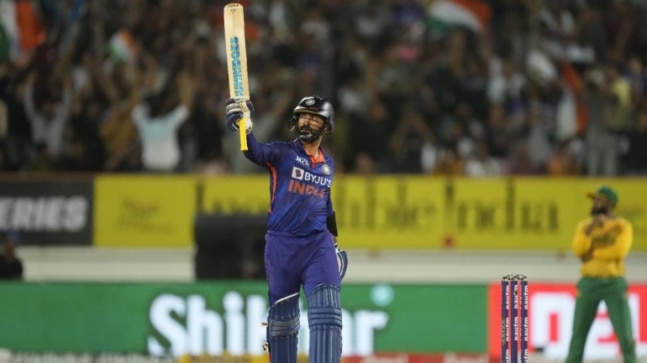 Sunil Gavskar has brushed aside concerns about Dinesh Karthik’s age and said it would be a surprise if the Tamil Nadu batter wasn’t a part of India’s squad for the T20 World Cup.

Cricketing legend Sunil Gavaskar has said that he would be surprised if Dinesh Karthik wasn’t part of the Indian squad for the upcoming T20 World Cup in Australia this year.

Karthik has enjoyed a career renaissance in the shortest format of the game. His exploits for Royal Challengers Bangalore in the IPL brought the spotlight on him and many were happy to see him back in the national jersey for the ongoing T20I series against South Africa.

The Tamil Nadu batter’s quickfire 55 proved to be decisive in the fourth game against the Proteas on Friday as India levelled the series heading into the decider at Bangalore. It was also Karthik’s maiden T20I fifty.

Gavaskar commented on the 37-year-old’s innings during the innings break and said that he came in at a time when India had to score runs from every delivery.

“As far as Dinesh Karthik is concerned, he came in at a time the bat had to be thrown at every delivery,” said Gavaskar.

The Indian legend also brushed aside concerns about Karthik’s age and said that people should be looking at what he is doing in the game at the moment. He concluded by saying that it would be a surprise if the Tamil Nadu batter wasn’t included in India’s T20 World Cup squad.

“Don’t look at his age, look at what he’s doing. If DK is not on that flight to Melbourne, it’ll be a big surprise,” said Gavaskar.

Karthik’s fifty, which consisted of nine boundaries and two sixes, powered India to 169 in 20 overs. While chasing the target of 170, the South African batting lineup crumbled and were bundled out for 87 with Avesh Khan picking up four wickets for just 18 runs.

For his game-changing knock, Karthik was rightfully named Man Of The Match.

England vs India, 1st T20I Live Streaming: When and where to watch Southampton match live on TV, online

England vs India, 1st T20I Live Streaming: When and where to watch Southampton match live on TV, online