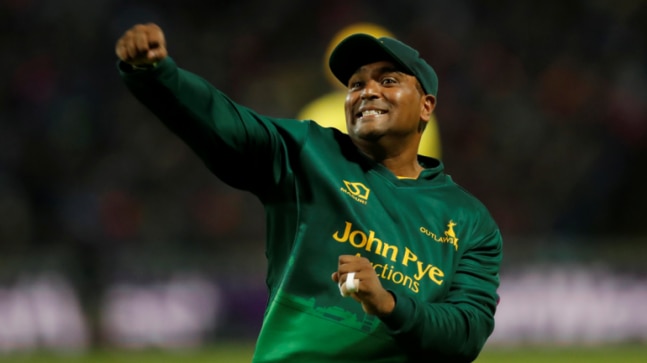 37-year-old Samit Patel, on Tuesday, June 21, picked up his 300th wicket in the T20 format. The veteran made his debut in the format 19 years back in 2003 and has still been going great guns. He is currently plying his trade for Nottinghamshire in the T20 Blast 2022, where he hasn’t flattered to deceive by any means.

In his team’s previous match against Leicestershire at Trent Bridge in Nottingham, Patel picked up two crucial wickets of Harry Swindells and Arron Lilley, thereby finishing with impressive figures of 4-0-29-2. After he got rid of Lilley, Patel touched the 300-wicket mark in the shortest format.

However, Patel’s brilliant spell of bowling went in vain as Leicestershire went on to secure a 47-run victory. The Leicester-born Patel started his knock with a four, but got out to Afghanistan fast bowler Naveen-ul-Haq after scoring a 10-ball 12.

Naveen went on to pick up a four-wicket haul and helped Leicestershire bowl Nottinghamshire out for 123 in 19.4 overs. Alex Hales tried valiantly with a 43-ball knock of 55, laced with five fours and two sixes, but his knock went in vain.

WICKET | It’s the #NaturalBornThriller with a milestone scalp!

Samit Patel takes his 300th T20 wicket as Lilley slices to Calvin Harrison on the point fence for 23.

Patel, in the meantime, is nine wickets short of becoming the first bowler to rack up as many as 200 wickets in the history of the T20 Blast. He is also the second-highest wicket-taker of the tournament after left-arm spinner Danny Briggs, who has 199 wickets to his name.

Share
Facebook
Twitter
Pinterest
WhatsApp
Previous articleIt was the right idea: Dasun Shanaka defends himself after scraping past Australia in final over thriller
Next articleOn this day: A dream diminished for Carlos Brathwaite in the 2019 World Cup match against New Zealand