Tim Paine reveals admiration for Virat Kohli’s innings in 2021 Adelaide Test: He did not look like getting out 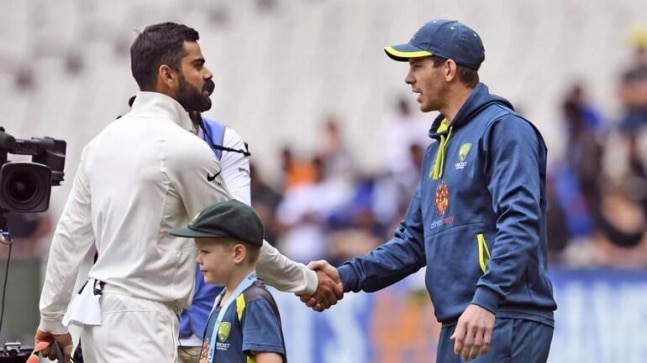 Tim Paine has revealed his admiration for Virat Kohli’s 71 during the 2021 Adelaide Test, saying that it seemed like the former Indian captain didn’t look like he was going to be dismissed.

Tim Paine has revealed his admiration for Virat Kohli’s knock during the 2021 Adelaide Test and even claimed that he felt the Indian star batter wasn’t going to get out on the day.

The day-night test in Adelaide was the first match in the Border-Gavaskar trophy series back in 2021 and is remembered for India’s second innings collapse where the team was bundled out for just 36 runs.

However, in the first innings of the Indian team, Paine admitted that he was a bit worried as Kohli seemed to be in fine control. Speaking on the docuseries Bandon Mein Tha Dum, the former Australian Test skipper said that he felt his team was in for a tough time with the Indian star at the crease.

“Yeah, I must admit though when he was batting he was on 20-30. Then the lights came on, and I was like ‘Wow, he did not look like getting out, did he? And I was like ‘We are in some serious trouble here,'” said Paine.

Kohli was receiving ample support from Ajinkya Rahane and both batters were carrying India to a comfortable spot in the match. However, an untimely mix-up between the two meant that the former Indian captain’s innings was cut short and he had to return to the pavilion for 71 runs.

The fall of Kohli allowed Australia to comeback into the game as they ended the innings at 244. Paine called it a brilliant moment as they were gifted a wicket during a time when Australia felt they were out of the game.

“Thankfully, Rahane ran him out. It was brilliant. Particularly, when you feel so out of the game, we couldn’t create a chance and they were batting so well, to then be literally just gifted one, and a really simple one,” said Paine.