HomeSportTwo legends, one frame: Brain Lara catches up with Rahul Dravid during...
Sport 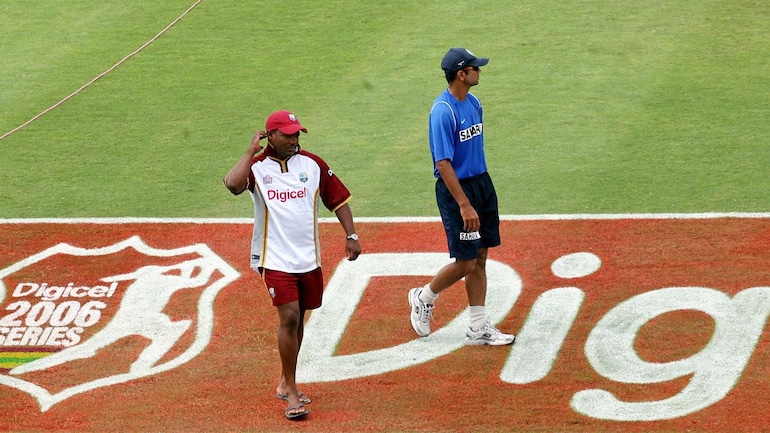 Trinidad legend, and one of the most successful batters of all time Brian Lara met Indian legend Rahul Dravid on the sidelines during India’s first ODI game against West Indies. Lara, who hails from Trinidad walked into the ground and met the head coach of the Indian team.

Brain Lara and Rahul Dravid have played against each other in the 1990s and the 2000s when both players were in their prime. While Dravid was known as one of the most technical batsmen of all time, while Lara was one of the most prolific left-hander to ever grace the game.

A serial record breaker, Lara in his career not only made the highest Test runs in a single innings, he hit the highest First Class score still remains unbroken. The former Windies captain currently coaches SunRisers Hyderabad in the Indian Premier League. Under Lara’s watchful eyes, youngster Abhishek Sharma had his best season in the IPL, while the likes of Rahul Tripathi, Aiden Markram and Nicholas Pooran put up strong performances.

While Lara has not ventured outside the IPL, Dravid, after working as a coach for Rajasthan Royals, did the hard yards with the Indian set-up, first bringing up players from the U19 team and then taking over the National Cricket Academy to keep a close watch on youngsters.

Under Dravid’s tutelage, many future superstars broke through the ranks – Ishan Kishan and Prithvi Shaw being the best of them.

After the end of Ravi Shastri’s tenure, Dravid took over the Indian side and maintains a good record at the moment. The former India captain has had to face many challenges in his brief period, but has managed to put together a winning team, despite not having a set combination, just months away from the World Cup.

India will be playing two more ODIs and then take part in a five match T20I series against West Indies as a part of the World Cup preparation.

Share
Facebook
Twitter
Pinterest
WhatsApp
Previous articleEngland batter Jonny Bairstow commits to all formats amid workload debate: I don’t see myself making a choice
Next articleDavid de Gea wishes to extend his Manchester United career: If they let me stay, I will stay for sure