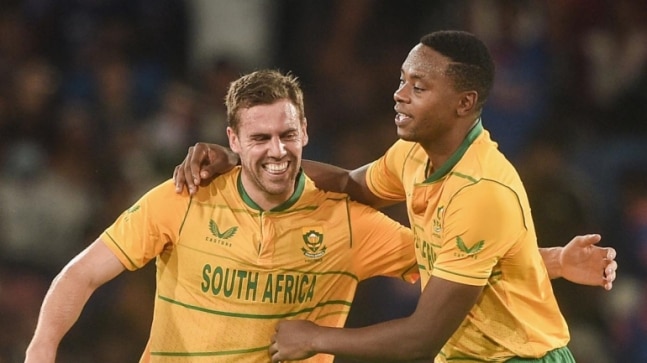 South Africa’s tearaway fast bowler Anrich Nortje said on Thursday that he is not bothered about the reading on the speed gun and that he is focused on contributing for the team’s success. Nortje, who is one of the fastest pacers going around, said he has been working on maintaining his pace but that’s not something he would be worried about when on the field.

Anrich Nortje, speaking to the press on the eve of the 4th T20I of the ongoing 5-match series against India, shed light on Umran Malik’s pace, saying the India fast bowler can crank it up welll but added that he is not competing with anyone in a bid to bowl the fastest ball.

Umran Malik, who receieved his maiden India call-up fo the ongoing T20I series against South Africa, instilled fear in the minds of opposition batters by consistently hitting speeds in excess of 150 kph in IPL 2022 for the SunRisers Hyderabad.

Nortje bowled the fastest delivery of IPL 2020 – 156.2kph, which was also the fastest until Umran Malik bowled 156.9kph for SRH in IPL 2022. However, the young Srinagar pacer’s record was broken by New Zealand’s Lockie Ferguson who clocked 157.2kph for Gujarat Titans in the IPL 2022 final against the Rajasthan Royals.

“At this stage, I’m not bothered too much about who is the fastest and what the speed gun says,” Nortje said.

“It’s about what I can contribute for the team. When you train, when you are not playing, you obviously think about how you can crank it faster with your work, your training, your gym, or whatever you’re doing. So in the back of my mind, it’s something that I would like to keep on striving towards. But it’s not something I’m thinking about when I go onto the field.

“Malik is a very good bowler, very fast bowler. He showed what he can do. And if he gets faster, great for him. If I get faster, great for me. But I don’t think we are at that stage where we are competing to try and just bowl the fastest ball. It’s about winning games and trying to contribute,” he added.

Meanwhile, Nortje, who seems to be hitting peak form after having been bogged down by a series of hip and back injuries after the T20 World Cup in the UAE last year, said South Africa will be keen on wrapping up the series in Rajkot and not giving India another window of opportunity to level the series.

South Africa went 2-0 up after winning the first two T20Is but India fought back strongly to seal a convincing win int he 3rd T20I in Visakhapatnam on Tuesday.

“I said at the last game as well that this was sort of like a final for us. We obviously didn’t perform well or anything to what we are capable of. So this would probably be like a final again for us.

“A second chance but we need to seal the series as soon as possible and not give them an opportunity or any sniff, that’s the main goal of this series as well,” he added.

The two teams will meet in Rajkot for the 4th T20I on Friday.