We’ve all got the confidence: Aaron Finch trusting Steve Smith at no. 3 going into the T20 World Cup 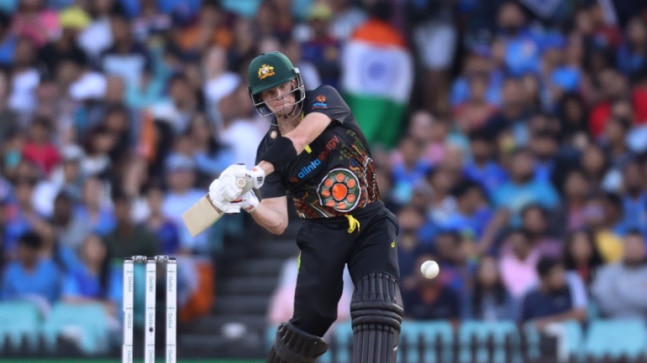 World champions Australia are scheduled to take on Sri Lanka in a three-match T20I series for the build up to their T20 World Cup campaign set to be played at their home in the months of October and November. The defending champions do not have a lot to work out in the team, barring the middle order setup that constitutes the likes of Steve Smith, Glenn Maxwell, Marcus Stoinis, Mitchell Marsh, Jos Inglish and Matthew Wade.

With the likes of Maxwell and Stoinis already final in the middle order, and Marsh being an automatic selection if he keeps fit, the toss up will be among the rest to finalise a position in the playing XI.

Australia released their playing XI ahead of the game on Tuesday, June 7 in Colombo, and included Steve Smith in the batting line-up. The team ignored strong performances from Josh Inglis who has not put a foot wrong for Australia, scoring 179 runs in 6 matches, at a rapid strike rate of 145.

Captain Aaron Finch defended Smith’s selection and stated that the Australian team has full confidence in his abilities and the role that he needs to execute for the team.

“The ability for Steve is to play that role where if we lose a couple of wickets in the powerplay then he comes in and plays that top-order role,” Finch was quoted as saying by Australian publication WA Today.

He stated that Smith will be floated in the line-up depending on the conditions in the game.

“But if we get outside the powerplay then Maxy will go in at No. 4 and Smithy will slot into that middle order,” Finch said.

“He’s someone who can read the game as well as anyone and is as skilled as anyone in the world, so just giving him the freedom to go out there, take the game on and play what’s in front of him is super important. We’ve got all the confidence he can play that role unbelievably well,” the captain argued.

Smith played as a sheath anchor in the T20 World Cup, batting at a strike rate of around 100. His selection has been a point of debate in the Australia line-up which is packed with power-hitters. Australia will hope that Smith will bring his spin-playing prowess in Sri Lanka conditions.