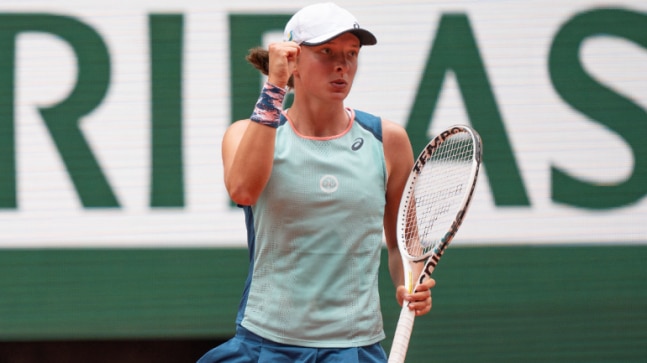 French Open champion Iga Swiatek will skip next week’s Berlin Open WTA 500 tournament due to a shoulder issue, but the world number one said on Friday that she hopes to be fully fit for Wimbledon starting later this month.

World number one Iga Swiatek confirmed on Friday she has withdrawn from next week’s grass-court WTA tournament in Berlin to rest her shoulder, but the French Open champion said that she hopes to be fully fit for Wimbledon.

However, she will now head to the Wimbledon grasscourt Grand Slam starting on June 27 without any preparatory tournament.

“Due to a recurrent discomfort I am feeling in my shoulder, unfortunately I need to withdraw from the bett1open in Berlin,” Swiatek tweeted.

“I’m sorry I will not be able to play there. I will focus on recovery and rest in order to be ready for Wimbledon.”

Swiatek, who took over as number one when Australian Ash Barty announced her shock retirement in March, has been in red-hot form recently and has won 35 consecutive matches – matching the longest unbeaten streak since Venus Williams in 2000.

A former junior champion at SW19, Swiatek made her first trip to the round of 16 last year before being stopped by Ons Jabeur. The 21-year-old is seeking her first title on the surface, with all of her past tour-level finals coming on clay and hard courts.

The Berlin Open will begin on Monday.

Share
Facebook
Twitter
Pinterest
WhatsApp
Previous articleIndia-South Africa arrive in Odisha as Barabati Stadium gears for its first T20I in four and a half years
Next articleLIV Golf series: Everything you need to know