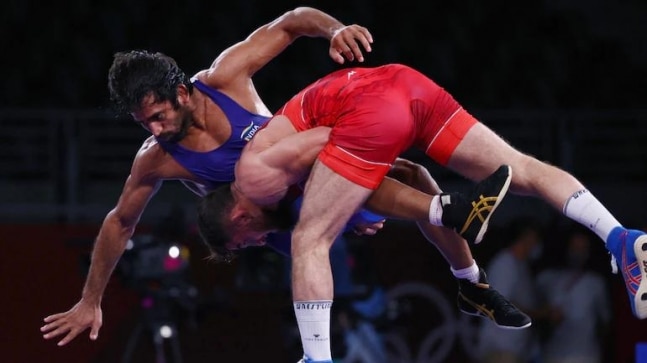 Bajrang, the Tokyo Games bronze winner, struggled in his opening bout against Uzbekistan’s Abbos Rakhmonov, losing 3-5, but fought back to win a bronze medal on Sunday.

Wrestler Bajrang Punia fought back from a poor opening-round defeat to win a bronze medal while Aman claimed his first gold medal at the senior level with a commanding show in the 57kg competition at the Bolat Turlykhanov Cup in Almaty on Sunday.

Bajrang, who won the Tokyo Olympics bronze, suffered a tame defeat in the opening round to Uzbekistan’s Abbos Rahkmonov due to his ultra-defensive tactics. However, he bounced back, scoring a 7-0 win in the bronze medal play-offs against Kazakhstan’s Rifat Saibotalov.

Bajrang, the Tokyo Games bronze winner, struggled in his opening bout against Uzbekistan’s Abbos Rakhmonov, losing 3-5 but competed much better in the bronze play off where he played smartly to score on counter-attacks against Kazakhstan’s Rifat Saibotalov, winning 7-0.

In the 57kg, Aman, who trains at Chhatrasal stadium with Tokyo Olympics silver medallist Ravi Dahiya, impressed and went on to win the gold medal, his first at the senior level in an international event.

He began with a 15-12 win over Meirambek Kartbay in the high-scoring opening bout and followed that with a technical superiority win over Abdymalik Karachov from Kyrgyzstan.

In his final bout, he edged out Kazakhstan’s Merey Bazarbayev 10-9 to stay unbeaten in the five-wrestler category to claim gold.

It is Aman’s third medal this season, having won a silver at Dan Kolov and a bronze at Yasar Dogu.

India thus signed off from the wrestling tourney in Almaty with 12 medals from the Ranking Series event with the women’s wrestlers claiming eight of them, including five gold.